Shut out of Ironman by coronavirus, local triathlete aiming to do it by herself 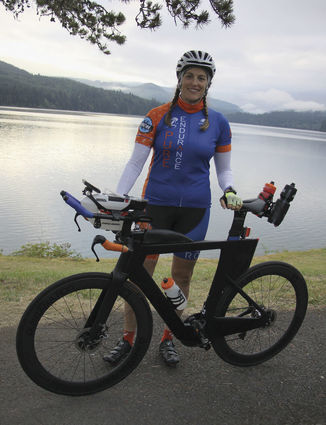 REBECCA WOLTHUIS starts an early morning bike ride at Shea Point, which will be the start and finish of her quest to finish an Ironman triathlon this Saturday, July 25.

Rebecca Wolthuis' seventh-grade PE teacher told her to forget about being a swimmer: "that I was not a good swimmer and probably never would be."

So much for predictions.

At 7 a.m. this Saturday, when many Sweet Home residents will likely be wondering if they should arise for the day, Wolthuis plans to be exiting Foster Lake after completing a 2.4-mile swim and moving on to tackle a 112-mile bike ride – the first and second legs of an Ironman triathlon.

Wolthuis, 46, will be doing the race, which finishes with a full marathon – 26.22 miles, on her own because, thanks to the COVID-19 pandemic, her plans to complete an official Ironman this year came to naught.

She'd spent years, training up to 20 hours a week – running, biking and swimming – to compete in the Santa Rosa Ironman in California. Her quest was derailed by injury last year and this year the triathlon has been postponed, with no clear date.

The Ironman triathlon is considered one of the most difficult one-day sporting events in the world. Originating in Hawaii in 1978, it has expanded to include more than three dozen races throughout the world.

Wolthuis began proving her junior high teacher wrong as a college student, when, after having suffered an injury, her physical therapist told her that swimming was all she could do for exercise.

"I've been swimming ever since," she said.

She'd participated in track in high school and was a cheerleader one year, she said, but it wasn't until she had moved to Sweet Home with her husband Ivan Wolthuis, a local dentist, and had her second child that she started really focusing on getting in shape.

"I decided to get serious about lifting weights and being more active, so I could stay active for my kids, for the future," she said.

She began swimming and running and working out with weights, but it wasn't until she had shoulder surgery in 2009 that she came full circle on developing triathlon event skills.

"They told me, 'the only thing you can do right now is sit on a stationary bike,'" Wolthuis said, recalling how she became serious about cycling.

Local cyclist Dave Redden introduced her to long-distance triathlon racing, and she was hooked.

She started out with a couple of sprint triathlons – swims of about half a mile, 12- to 15-mile bike rides and 5K runs – the Redmond Rat Race and then the inaugural Best in the West race in 2011.

"I've done every Best in the West," Wolthuis said. "It's grown from there. I've done a handful of sprints, some Olympics (1.5-kilometer swim, 40K bike, 10K run) and a couple of long courses.

That was the year Wolthuis decided to engage a professional coach, Philomath-based Jon Booth.

"I've been working with him for three years," she said. "He plans all my training."

Booth and two other coaches at Pure Endurance train a number of athletes.

Wolthuis said she trains with Booth one-on-one a couple times a month, and she also does workouts with other athletes on what she calls "the team."

"We get together to do group rides, bike mechanics clinics, group swims."

In particular, she rides with Joe Van Veldhuizen, a Corvallis firefighter who helped steer her toward the goal of doing an Ironman, she said.

That quest started in 2018, when she and Van Veldhuizen signed up to do the May 2019 Santa Rosa Ironman.

Those plans, though, were derailed when Wolthuis found herself battling a "nagging" ankle injury.

"In the Best of the West, I got off the bike and I couldn't run," she said.

Race Director Blair Bronson reclassified her to a duathlon – swimming and biking, so she could finish an event, but it was clear she needed to take time off and get the ankle fixed, she said. That process took too long for her to be able to maintain the conditioning she would need to finish an Ironman, so she had to give up on 2019.

She had ankle surgery and bounced back faster than anyone, including she, expected.

"I thought I would be out for eight weeks; I was back walking in two."

She eased back into training, doing "a lot of swimming and biking at first," then resumed her Ironman training schedule. Preparing for an Ironman is complicated, requiring peaks of intensive training followed by valleys of rest or "tapering," as an athlete builds strength, endurance and performance skills.

Wolthuis said she trains anywhere from 13 to 20 hours a week. Since the beginning of the year she's put in just over 2,500 miles on her bike, 414 running miles and 43 hours of swimming.

"Swimming used to be my favorite, but now cycling is, by far, my favorite," she said. "It stems from having a good bike and a coach that's taught me amazing cycling skills. It makes it so much more fun and efficient."

Her longest ride has been 113.7 miles, which, she noted, is just over the Ironman ride.

A typical training week would include seven to 10 hours of cycling, three swimming sessions of 45 minutes to an hour, and running three times a week – up to three hours. Her longest run, thus far, has been 19 miles.

"I've had people say, 'I saw you out running but you're not going very fast,'" Wolthuis said. "My coach says, 'You're not training for a sprint. You're training for a marathon after you've done a 112-mile bike ride.' My pace is slow, but it's consistent. I'm OK with that."

She said her family – husband Ivan and the three of her four kids who are still at home, Bradley, Jenna and Mark, have been key to her being able to be a triathlete.

"There's no way I could do this without the support of my family, because of the time required to train," she said.

Wolthuis was right on track with her training earlier this year when COVID hit.

The resulting shutdown of Sweet Home Community Pool stopped her swimming until she realized she could work out in the pond outside her home.

"I only missed two weeks of swimming," she said. "I would swim 10 minutes at a time because it was so cold. I feel fortunate I didn't miss out on swimming like a lot of athletes have. They didn't have access to a pond on their own property."

Triathlon training is lonely, she says. She occasionally swims at Foster with local triathlete Ken Bronson and runs with Gerritt Shaffer, who is a wheelchair athlete. She also trains with Van Veldhuizen and Booth, but mostly it's by her lonesome.

"I do probably 90 percent of my training alone," she said. "It's hard to coordinate everyone's schedules. Even when we're all training, sometimes it's hard to train with others when your schedule says you need to do something specific.

"People that aren't triathletes don't even know what I'm doing," she added. "It's kind of a lonely sport unless you're in the field of doing it."

Like many triathletes, Wolthuis focuses her training on areas in which she feels she needs to improve, in her case, running.

"I spend a fair amount of time running," she said.

The coronavirus has presented other challenges.

"When COVID hit, all the parks were closed," Wolthuis said. "That was a game-changer. On long rides, how do you plan your pit stops?"

The pandemic prompted the Ironman Foundation to announce in April that the May race in Santa Rosa would be postponed.

"They didn't give us any options," Wolthuis said. "They said we'd get options at the end of May."

That was too nebulous for where she was at in her training, she said, so she came up with another plan: do an Ironman by herself. She had the resources to do it, she told her coach.

"I'm comfortable swimming at Foster and I knew I could pull off my own, self-structured Ironman."

Booth bought in, even more than expected, she said.

"He's become my race director. He's amazing. I just thought I'd show up with my van and my family and have them follow me around, be my aid station, my cheerleaders. He's pulled in other athletes to participate with me, I think, through the whole course."

Her quest will start at 5:30 a.m. on July 25 with three swimming loops in Foster Lake from Shea Point to the Sunnyside day use parking lot and back.

The cycling course that will run from Shea Point around the lake to North River Drive, then to Pleasant Valley Road, to McDowell Creek and Fairview Roads to Waterloo. Starting at Waterloo she plans to complete four loops up Bellinger Scale Road to Lacomb and then north on Lacomb Drive to Brewster Road, back to Lebanon and then back to Waterloo on River Road. Having completed the four circuits, she will return to Shea Point via the same route.

"I tried to mimic Santa Rosa, but because of some road closures, I had to modify my ride," Wolthuis said.

The run will be three circuits of Foster Lake from Shea Point, with an extra mile-long out-and-back to Sunnyside Park to get to the marathon distance.

She expects to complete the ride portion of the event by mid-afternoon and expects her run to last till around sundown, possibly as many as seven hours.

Social distancing guidelines must be followed by all participants, she emphasized.

She said Ivan, her husband, has taken care of one problem by arranging to mount a Porta-potty on a trailer behind his vehicle so any park bathroom closures won't be a problem.

Wolthuis said she hasn't really publicized her plans, but word's gotten out and supporters are lining up.

Van Veldhuizen plans to run the marathon portion with her, and other athletes have said they plan to accompany her, pretty much the length of the bike ride.

"People I didn't even know about are coming," she said. 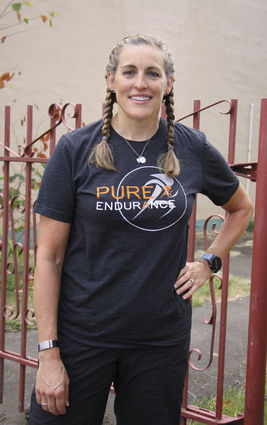 Sweet Home's Rebecca Wolthuis has trained to compete in an Ironman triathlon for years. After COVID cancelled the event she had scheduled, she's decided to do her own – this week.