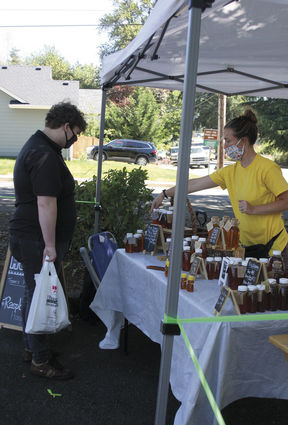 Despite new regulations and slight economic loss, vendors, volunteers, staff, and even customers at the Sweet Home Farmer's Market have all "learned to adjust to what's going on around us," said Market Director Belinda Bayne.

"We're just trying to make the best of everything."

In previous years, Bayne said, the Farmer's Market was a "social event" for the whole family, where people "ran into their neighbors" and stopped "to say hi." Now, in the midst of COVID-19, the market is similar to a "grocery store," Bayne said. "You grab what you need and leave."

To encourage the grab-and-go mentality, the market no longer sports many of its usual attractions, such as live music, the kids' and other non-profit booths, and ice cream, which often causes people to sit and stay a while.

Bayne assumes also that many families are only sending out one person to do the shopping, in hopes of decreasing the risk of exposure. It is for those reasons she believes overall attendance is down in Sweet Home. Another reason, she said, is less advertising than in previous years, due to budget cuts.

However, Bayne said, "the people who are coming are buying more."

"I think they're thinking more about buying local," Bayne said, adding she believes the pandemic has "opened people's eyes" and "made them more appreciative" of what the market has to offer. Additionally, she said, she assumes families are sending just one person to do the shopping now, hoping to lower the risk of being exposed.

Bayne said she's also "received a lot more thank you's for being here than ever before."

"I think people are really happy we're still here," she said, noting that while customers do appear "frustrated" by the new health regulations, they're willing to adhere to them out of "appreciation."

These regulations, and not the lack of customers, are what are affecting the market economically.

While Bayne said she and her husband, Chris, the market director, will "do OK this year" and plan to "budget" the market's expenses, she admitted that "as a farmer's market and a non-profit, we're making less money" due to "extra expenses."

For instance, to stay open, the market has had to purchase hand washing stations, sanitizer and soap, paper towels, and ribbon to help customers practice proper social distancing. No longer able to rely on nearby businesses for public access to their bathrooms, the market has also started renting their own portable toilets. Altogether, the cost amounts to an extra $30 per week.

"We just don't have the funds to do extra stuff," said Bayne.

Normally, local businesses sponsor the market, but "because of everything going on," she opted not to ask anyone. Now, to keep the market running this year, Bayne said she and her husband are relying solely on booth fees, which have also decreased.

Typically, the market has space 11 booths but this year, due to coronavirus regulations, it can offer five less than normal. At $15 per booth, this leaves the Sweet Home market at a deficit of $75 per week.

Thanks to the booth limit, Bayne said the market didn't allow new businesses to join the market this year. Of the returners, seniority and food type decide a vendor's regularity at the market.

Little Wuesten German Foods, Gambardella Honey Farms, and the Wright Farm rotate every week. Papa's Ice Cream, a veteran at the Lebanon Farmer's Market but who just joined the Sweet Home Farmer's Market last year, can currently only sell in Lebanon. Bayne said she's hoping to gauge how having ice cream at the larger Lebanon market goes first before she reintroduces it to Sweet Home.

Bayne Farms, the business she runs with her husband, is faring, Bayne said they're ultimately "doing fine."

"My husband was very worried at the beginning [of COVID-19], but I think he's settled in and has realized we're still making money," she said.

She said, similarly, other vendors "aren't going home with a lot of stuff" but that she "can't speak for them."

Alisea Horner of Cliffs Organic-Grown Creations said that she and her partner Cliff Armstrong are still "doing good" and "not really" feeling any financial burden.

"Our loyal customers keep coming back, so that's good," she said.

Still, she expressed frustration with the health regulations they must follow as a business, which include wearing masks and gloves, as well as not letting customers "touch the products."

"It just sucks, that's all I have to say," Horner said.

Even so, Horner said they're "living with it" because they "have no choice."

Bethanie Gambardella from Gambardella Honey Farms said that while she's "definitely" seen a difference in the "market traffic," she and her husband Nick's business is doing "not bad."

"With beekeeping, most of the money comes from pollinating farmers" who still need their services during COVID-19, said Gambardella. That isn't the case for all beekeepers, she said, but for them, business has "been pretty good."

She said it's more about "how people find" companies during this time, noting that having a "good social media presence" helps.

Gambardella has also started doing deliveries for people who "are to come out," especially her older customers.

"If I hadn't been doing deliveries, it would have been harder," she said.

"For me, it's been good because people are afraid of meat shortages," said Carol Porter of Sweet Home Chestnut Farm, who sells meat and pork at both markets. Porter brings just a small portion of her meat to the market every time, which she said allows her to "sell pretty well."

"When you tell people they can only have a certain amount, they want everything," said Porter.

Even with her own economic success, Porter said she is "invested in the market" and wants to see it "continue to grow."

Heather Wright of Wright Farms feels the same way. Reiterating what Bayne said about vendors still making money, but attendance being down, Wright said the market "isn't what it used to be."

She stressed the importance of supporting small farms and other local businesses instead of corporations.

"You know where your produce is coming from," Wright said, adding that you can even meet and form relationships with the vendors. "We're just families doing this."

She said one of the concerns people have when shopping at the Farmer's Market is the price of produce. However, she said it's not "gouged" and that the higher prices come from labor costs.

"It takes more to produce high-quality foods," said Wright. Most vendors, she noted, don't use chemicals or pesticides on their crops and, while many have not sought certification, consider their food "organically grown."

According to Wright, the market has "pretty much everything," often selling barley, wheat, honey, corn, peaches, cherries, strawberries, canned preserves, and even plants to help customers start their own gardens.

"You could easily come and pick out your dinner," said Wright, adding that she usually bases her last meal of the day on whatever she finds at the market. 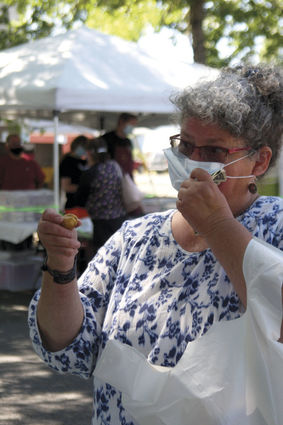 She also wants people to know that the Farmer's Market is "following all guidelines and precautions, so that it is a safe experience for everyone," and it's also "more open-aired than a grocery store."

If people are still concerned about their well-being by attending the market, Wright said vendors are "willing to work with people" and modify their business practices.

The Wright Family Farm, for instance, is selling assorted produce boxes "so people can feel safer shopping in public." Due to their "good connections with the community," Wright said they've also been able to do "on-farm sales."

Another option, she said, is to "connect with farmers" and have them drop food off "on the curbside."

"The farmers are really the angels around here, especially during COVID," she said.