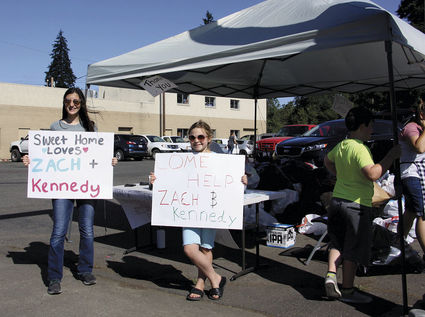 ALYSSA CRUZ and Brielle Bair show support during a can drive Saturday.

The community of Sweet Home has responded with a multitude of fund-raisers and other expressions of sympathy to the families of two children hit by a runaway jet ski.

Zachary Maynard, 6, lost his life after being struck by the watercraft and and his good friend, 6-year-old Kennedy Swenson, was severely injured.

According to his mother's Facebook page, Maynard died Thursday, July 23, due to his injuries, which included skull fractures.

Kennedy survived with severe injuries, including broken clavicle, sternum and jaw, according to her mother Jessica's Facebook posts.