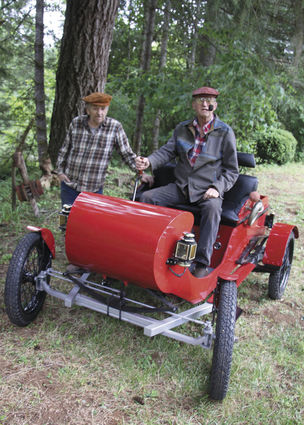 Bob Stone, left, and Frank Jurica show off their completed replica of a 1903 Olds Curved Dash Runabout, the same car that passed through Sweet Home in 1908 during the nation's first transcontinental automobile race.

The idea came to Frank Jurica a couple of years ago when he saw a set of old wheels that once had been on a buggy.

At home he had a book that contained a drawing of a Curved Dash Oldsmobile Runabout, the car used in the first transcontinental race in 1905, from New York City to Portland. The pair of Runabouts, "Old Scout" and "Old Steady," faced off in the race, which took Old Scout, the winner, 44 days and ended at the Lewis and Clark Exposition.

Jurica, a retired local trucker, decided he wanted to build a replica of Old Scout. He enlisted the help of his longtime buddy, Bob Stone, and...