Preparation pays off for local triathlete in personal Ironman 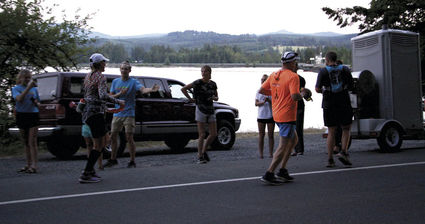 WITH A LITTLE over a mile to go in her 141.09-mile journey, Rebecca Wolthuis gets some encouragement from her son Brad, center, as her daughter Jenna, left, gets some video on the north shore of Foster Lake.

Wolthuis, 46, had planned to compete in the Santa Rosa (Calif.) Ironman before it was cancelled earlier this year due to the coronavirus. She and her coach, John Booth of Corvallis, decided she'd do one on her own.

Except it wasn't entirely on her own. Booth accompanied her on the 2.4-mile swim leg, and others rode the 112-mile bike segment and still others ran/walked the marathon – 26.2 miles with her.