By Kelly Kenoyer and Scott Swanson 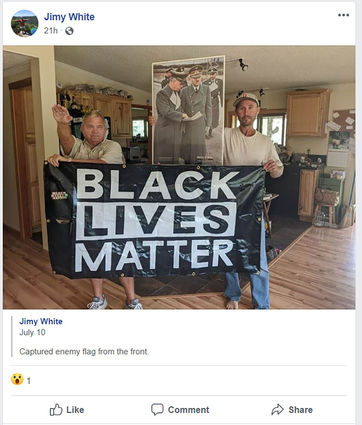 Two rallies held in the Safeway parking lot in recent weeks have been organized by an individual whose Facebook page contains images promoting white supremacy, including an image of a swastika.

A reader brought it to The New Era's attention following the initial Freedom Rally on July 17.

The Facebook page of the organizer, Jimy White, last week included at least one KKK flyer promoting lynchings, memes promoting the image of national socialism – more commonly known as Nazism, others opposing race mixing and multi-culturalism, and a photo showing White holding a Black Lives Matter flag and performing what appeared to be a Nazi salute beside a picture of Adolf Hitler. The caption on the photo says, "Captured enemy flag from the front."

A reporter who re-checked the site Monday at noon had been blocked, but subsequent investigation determined the images were still there, including the Black Lives Matter captured flag photo. The account re-shared that photo on Sunday, July 26.

Before a reader brought the matter to the newspaper staff's attention, White had visited The New Era office to have flyers made promoting the July 24 rally. He also ran an advertisement for the event in the newspaper. Neither promoted white supremacy, listing free speech, the right to keep and bear arms, the right to engage in private business without the permission of the government, and peace as topics of interest. It also included the words "pro family, pro community, pro police, pro veteran."

Contacted by a reporter at the rally Friday, July 24, White said his main purpose with the rally is to "let people come up and talk."

Asked about the images on his Facebook page, he denied posting them.

"Someone might have put them on my Facebook page, but I didn't do it," White said. "I never even saw this before."

White agreed that he had shared other photos on his Facebook of family events in between the white supremacist memes, but he said someone else must have posted the other images. When asked about the photo of him with an image of Hitler, he declined to talk any further.

"I believe the meeting between you and I is adjourned, because I don't want any people that have intentions of hurting my reputation or anything like that sneaking around on Facebook," he told the reporter in the parking lot.

Many attendees of the rally appeared to be interested in protesting Gov. Kate Brown's mask orders, or supporting the police. Though some at the rally teased the reporter for wearing a mask, they were friendly and appeared to simply want to gather in favor of freedom.

Some others, from out of town, appeared to have more specific views to share.

One, who identified himself as Michael Erickson, came to White's defense, saying his Facebook had been hacked as well. When shown prints of pro-lynching posts on White's page, Erickson said "I agree with this, death to traitors."

He went on to say "white America was better," and talked about wanting white people to only associate with other white people. While giving a speech on a bullhorn, Erickson said "racism is anything the left doesn't agree with."

Erickson said he had seen a post promoting this event on Telegram, an encrypted messaging app known to host white supremacist chat groups.

Erickson then followed the reporter around the rally. He asked about the reporter's ethnic heritage, and whether the reporter was a member of the FBI.

Erickson ran for City Council in Ashland in 2012 under the name "Biome," but his political leanings appear to have taken a turn toward the extreme right since then. He calls himself a "White (Aryan) Male American National Socialist / Historical Revisionist" on Twitter and shares anti-Semitic posts.

Both of the rallies have been open-mic style, and most of the speeches focused on the mask order, though Erickson called mask wearers "sub-human" in his speech – a known far-right dog whistle phrase.

White, the original organizer of the rallies, told The New Era reporter he only met Erickson last week.

According to the U.S. Department of Homeland Security, it is common for extreme right-wing organizations to recruit new members by using moderate language. That's because "most mainstream white individuals are either initially wary or hostile to white supremacist groups due to their racist message and the stigma associated with such groups," according to a DHS report. Recruiting at protests or events is quite common.

Dan and Faye Barnes attended the two rallies, but said they got a "bad feeling" from some of the speakers and organizers. Faye said Erickson came up to the two of them personally.

"He's just going on and on about the Jews and Blacks," she said.

Faye was shocked to hear that kind of rhetoric, she said.

"I'm not against any people, I'm against communism, socialism and Antifa."

Dan said that White came up to Erickson while he was talking to them about race and whispered something in his ear. Afterwards, Erickson changed the subject.

The Barneses decided to attend the rallies because they supported some of the messaging on the flyers. they said.

Jimy White said he arrived in Sweet Home recently, as he's a snowbird who summers in Oregon with his son's family and winters in Palm Desert in southern California. He said he plans to leave Sweet Home soon to travel to Thailand.

The majority of protesters at the rally appeared to be largely focused on the masks and on opening businesses.

Faye Barnes said she believes many of the attendees weren't there to support the messages she heard from White and Erickson. She said the people waving flags on the street and those driving by to honk in support may not have even heard everything the the two were saying.

For his part, Dan Barnes said he plans to show up again on Friday, July 31, when White has planned another rally. But this time, it's not in support, he said.

"If these people are bad, I'll confront them. I'm no coward."