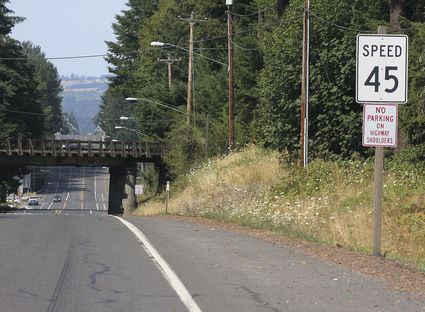 THE CITY has planned for years to build a sidewalk that includes this stretch of Highway 20, but has faced repeated setbacks.

A sidewalk project along Highway 20 in Sweet Home, which has been in the works for five years, has ballooned to over $3 million in total costs, City Council members learned Tuesday, July 28.

ODOT also has declined to build sidewalk under the railroad trestle due to liability, so the sidewalk will end just before the crossing and restart just after. The plan, as currently envisioned, will be a 10-foot-wide multi-use path for pedestrians and cyclists, along with two pedestrian crossings across Main Street.

At the council's July 14 meeting, Community and Economic Development Director Blair Larsen described the project as "a really expensive sidewalk."'

City Manager Ray Towry said, "Frankly, it's things like this that gives government a bad name."

Sweet Home Staff Engineer Joe Graybill, who has worked on the project for more than 15 years, said the projects costs have gone up even as the scope as been reduced. The full project is now projected to cost more than $3 million, double the original estimate of $1.5 million.

Costs have gone up largely because the state mandates storm water improvements with these kinds of projects, he said, so the project's scope includes expensive stormwater engineering. Pedestrian crossings also cost more to build now due to new safety requirements.

"They need to make ADA accessible aprons for each side and the middle refuge, it's darned expensive," Graybill said. The planned pedestrian crossings at 40th and 49th also require new lights to go in, along with the "middle refuge" that allows pedestrians to wait safely between the two directions of traffic.

Despite the increased costs of the overall project, the city's financial obligations remain the same. "The city's contribution is dictated by the contract and it's still around $300,000 that we're committed to," Larsen said.

Mayor Greg Mahler asked if it would be possible to change the scope of the project the same way ODOT did, but Larsen said it's a matter of leverage. If the city pulls out of this agreement, it's out the amount of money Sweet Home has already put in – $25,880.04 – and doesn't get any improvements along the highway. If the city goes through with it, it needs to put in the remaining balance on the $299,535 or so promised.

"For what we're putting in, it's still a good deal for us." Larsen said.

Graybill said the project is worth completing despite the increased cost and limited scope because the pedestrian crossings at 40th and 49th could save lives and prevent injuries.

"We've had injuries and a death at the 49th crossing," he said. "Those crossings are key for our community."

Councilor Diane Gerson asked why there were no plans for a crossing at Riggs Hill.

"We have a lot of people who cross the highway there because of the lake access. They didn't see it as important?"

Graybill said the crossing was removed because of expenses.

"Even to put in a rapid flashing beacon isn't advisable at that location," he added, because the speed limit there is too high there for drivers to stop safely without being rear-ended.

Mahler expressed frustration with the delays and rising costs.

"We started this in 2012; what century are they planning on doing this?" he asked.

Graybill said he began designing for this project in 2003 or 2004, and attempted several grant applications before this application succeeded.

He said the purpose of the project is to "improve access" to the hiking trails and recreational areas around the lake, especially for those not in a vehicle.

Councilor Dave Trask expressed concerns about liability if Sweet Home takes on construction of the sidewalk underneath the railroad trestle.

"Do we want to take the chance of scratching the pavement with a backhoe, and that thing collapses? I don't want them to put that on us," he said.

The Albany and Eastern Railroad trestle, which passes over Highway 20 just west of 59th Avenue, was damaged by an accident or two in the past 20 years, which warped the crossing.

Larsen said the bridge is "severely" damaged, but the company that owns it doesn't have any plans currently to take it down or repair it.

"Their perception of the railroad bridge is rosier than mine. They want to keep the bridge in place; they seem to think at some point it can be rehabilitated and repaired," he said.

Larsen said the railroad only has one customer on the other side of the bridge, and that customer is not currently interested in rail service.

"It seems to me it would be kind of foolish to try to repair it; they should replace it." 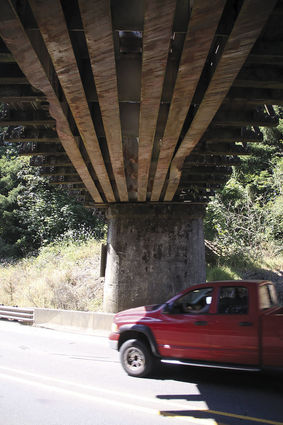 THE RAILROAD TRESTLE over Highway 20, above, has been hit twice in recent years by vehicles, causing shifting and bent girders.

At the same time, refusing to build the sidewalk under the trestle would require a barrier that says "sidewalk ends here" on each side of the trestle, and "most people would probably just go around and go under the trestle to the other side," he said.

Councilor Lisa Gourley asked if the bridge is structurally safe enough to remain over the highway, and Larsen responded that it's safe so long as there's no traffic on it.

Larsen said later that the city and state have limited legal power to require any demolition or repairs from the railroad. ODOT explored its options while considering this project and decided not to fight the railroad.

"Railroads are kind of difficult to work with because they have a lot of protections at the federal level," Larsen added.

The status report at the City Council meeting didn't require any action by councilors to continue the project, and no votes were held.