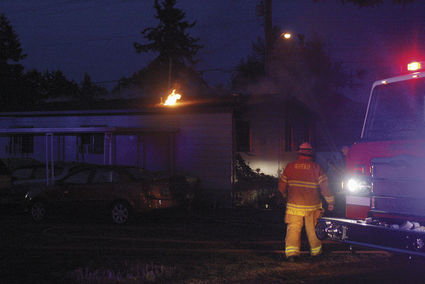 Fire damaged a mobile home in Tamarack Ridge Estates early Tuesday, July 28. A caller reported the fire at 5:03 a.m., at 1430 Tamarack St., space 104. According to Sweet Home Fire and Ambulance District, Sweet Home police were already on the scene with a hose when firefighters arrived at the double-wide mobile home. The fire was burning in "a couple of rooms," said Julie Mayfield, assistant to the chief. The fire appeared to have originated in electrical wiring next to the toilet. Property damage was estimated at $25,000, and content loss at $20,000. No one was injured, she said. Four appa...