Bystanders team up to save boy snared in rapids 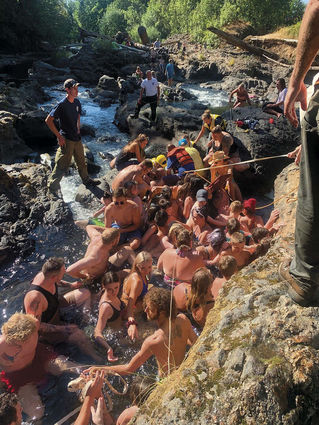 BYSTANDERS form a barrier to reduce water flow as Sweet Home Fire and Ambulance District rescue personnel work to free the boy who was caught in rocks in a rapid at McKercher Park.

Four different agencies and at least a dozen bystanders helped rescue a young boy trapped in the rapids at McKercher Park Saturday afternoon.

According to officials, the 10-year-old boy, who's from Springfield, became trapped after jumping off some rocks into the rushing rapids, and bystanders helped keep his head above water while emergency personnel came to the rescue.

Sweet Home Fire and Ambulance District received the call at 4:21 p.m. and had to dispatch rescuers from the scene of a separate accident on Highway 20 to assist. The Oregon Department of Forestry, Linn Count...