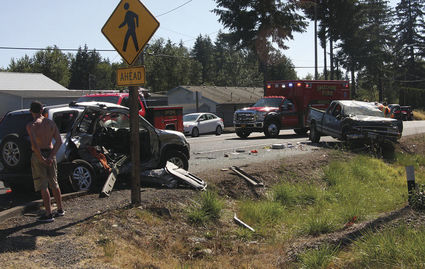 Both drivers were taken to Samaritan Lebanon Community HOspital Saturday afternoon after a two-car collision on Main Street, just east of 60th Avenue. Police and medics responded at 4:06 p.m. According to Police Chief Jeff Lynn, a Honda CRV operated by Hayden Draper, 19, turned in front of a 1995 Chevrolet pickup driven by Kenneth Spann, 76. Both were in their vehicles when medics arrived, Lynn said, noting that their injuries did not appear to be life-threatening. He said speed did not appear to be a factor. An investigtation is ongoing, according to a police report. Lynn said the road wa...