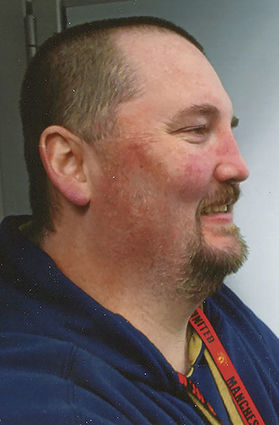 Christopher Klesh, 46, of Sweet Home lost his hard-fought battle with multiple sclerosis and passed away on July 28, 2020.

He was born March 27, 1974 in Salem to Richard and Marylyn (Ruckwardt) Klesh.

His tenacity and love for life allowed him to overcome numerous obstacles, although the odds were against him. His fighting spirit was simply amazing.

Chris was the oldest of two children. He grew up in a loving household in Beaverton.

He graduated from Sunset High School and went on to earn a bachelor's degree at Western Oregon University.

After college he spent some time as a retail manager and then became an insurance adjuster in the rental car industry. Chris fell in love with Sweet Home and moved here in 2017 with his wife and beloved animals.

He grew up playing various sports including baseball and football. Once he was unable to play sports, his love for them did not wane.

He was a diehard Notre Dame fan and was happiest when he could catch a game with his dad. He could often be heard chanting "Rooney" in the early morning hours as he watched his beloved Manchester United. The outcome of a Dodgers game could make or break his day. Needless to say, if there was a ball or puck involved, he was probably watching.

Chris also enjoyed traveling, trips to the beach, listening to music, attending concerts, playing trivia, watching movies and reading. However, he was happiest when he was with his family.

He is survived by his wife, Penny Klesh of Sweet Home; parents Richard and Marylyn Klesh of Beaverton; brother Matthew Klesh all of Beaverton; nephew Avery Leighton McMyne of Estacada; and his beloved fur babies: Davis, Fisher, Kenzie and Jersey.

A graveside service will be held at 11 a.m. Friday Aug. 7, at Gilliland Cemetery.