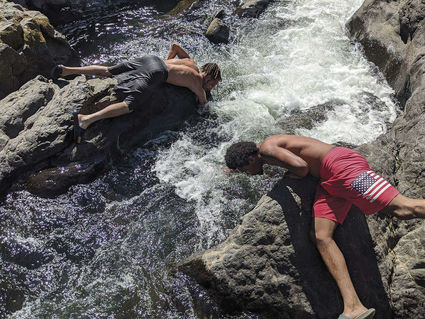 Park-goers Torell Ireton and Cameron Harris, who were involved in the rescue of an 8-year-old girl on Aug. 4, probe for a hidden log, barely visible at lower left, that has trapped two children in the rapids at McKercher Park.

Just a few days after a 10-year-old boy's dramatic rescue required the efforts of more than a dozen bystanders on Aug. 1, a second child became trapped in the rapids of the Calapooia River at McKercher Park.

On Aug. 4 at 4:30 p.m., an 8-year-old girl got stuck in the same location as the boy did three days earlier. Bystanders were able to free the girl before rescuers arrived.

According to a news release from Sweet Home Fire Department, a log wedged underwater was the cause of both entrapments.

The fire department asks that visitors to McKercher Park and other areas with swift water be ver...