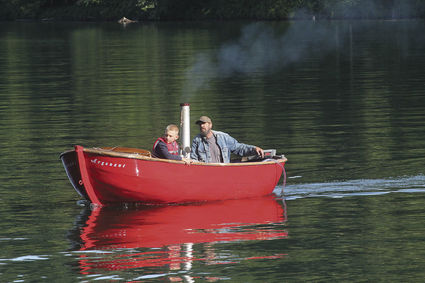 PHIL NELSON and Sam Franklin take the Argonaut, a 1920s-era steamboat, on its maiden voyage at Foster Lake Saturday after Nelson restored the ancient craft.

There's an old Scout song and a movie about Steamboat Bill, but this is a story about Steamboat Phil, who went to Foster Lake to see if his old craft could ride the waves still.

Phil Nelson acquired an antique boat named "Argonaut," that is powered by a steam engine, and is believed to have come from the USS Argonaut submarine from the 1920s.

After spending the past couple of years fixing up the historic craft, Nelson took it for a trial run at the lake early Saturday morning.

"This is the first time it's been in the water. It's either gonna sink or swim, but it runs," Nelson...