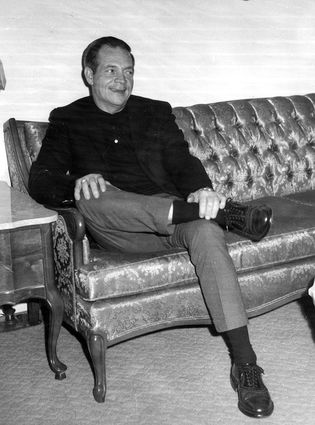 William generally went by the name of Ed or Edward, but many people just called him Mac.

Mac grew up during the Depression and busied himself doing many of the things poor children did that lived by the train tracks, like throwing rocks at the boxcars as they passed. The engineers took a liking to him and he said they often would give him sweets and treats.

In his teen years, Ed took up boxing. His claim to boxing fame was the match he won against the Golden Glove champion of Pennsylvania. Mac would spend many of his adult years in boxing gyms training young people in the art of a pugilist.

Early in the year of 1942, his mother lured Edward and his younger brother Donald into attending church with her by telling them that there were two cute girls there. She wasn't lying, and both Don and Ed would end up marrying those two girls.

Within five months of meeting her, Ed married one of those cute girls, Wanda June Smith, on May 9, 1942.

Edward was inducted into the Army in December 1942.

Although only 80 miles away in Virginia, Ed could not take leave for the birth of their firstborn son Bill in June 1943. He was among the troops being amassed to shortly sail across the Atlantic to North Africa for the invasion of Sicily.

Ed would spend the next 2½ years in Italy, doing his part in the defeat of the Nazis in World War II. At the end of the war he was honorably discharged in October 1945.

Ed was awarded with the American Defense service medal, the European Africa Middle Eastern service ribbon with a bronze arrowhead and a good conduct medal.

By the time Edward got to meet his son, Billy was 2½ years old. It would not take long before he was no longer an only child.

Within a short time after returning from the war, Ed would accept Jesus Christ as his Savior and the Lord of his life.

In 1951 Ed and Wanda and their four sons moved to Wisconsin, where he attended Bible school. A couple of years later, they would return to Hampden, Md. to pastor the little congregation at Hampden Community Church.

Ed pastored the church and worked full-time as a deliveryman for Lay's potato chip and snack company – much to the delight of his boys!

Wanda had read a magazine article that said a woman in her 40s had a higher chance of giving birth to a girl, and hence the addition of three boys to the family.

In 1965, on the advice of doctors for Ed to move to a drier climate, he, Wanda, the five youngest boys and Ed's mom moved to Albuquerque, N.M.

After a year the family moved to Southern California and settled in Hawthorne (home of the Beach Boys, by the way).

One of the lifelong sadnesses Ed lived with was leaving that little church in Hampden. In the years to come, he would serve as an associate pastor in Albuquerque and in a couple of churches in Southern California.

Mac was a serious dog lover.

There is a kids movie titled "All Dogs go to Heaven." But even if it's only one in 10 that make it there, over the course of Ed's 98 years, he will surely be greeted by a good half dozen of his loyal tail-wagging friends.

If Ed was anything, it was loyal. He was a faithful husband of 78 years to his bride Wanda, taking care of her to the very day of his death.

Edward was fiercely devoted to his children, working hard his entire adult life to love and provide for them.

To know William Edward McCartin, was to love him. He never met a stranger. He would light up a room with his good humor and joyful spirit.

You could sum up his life by saying that he took to heart Jesus' greatest commandment: "Love God with all your heart and other people like yourself."

I (Mark) never knew him to find other people's shortcomings or failures to be a topic worthy of discussing with others, nor to hold a grudge against anyone... except maybe for one when the Baltimore Colts slinked out in the middle of the night to move to Indianapolis. But I think even that was more of an irritation and disappointment than it was a grudge. ;)

While it was never stated, it was obvious that Ed lived his life by the maxim: "Leave everyone you encounter happier than where you found them."

Mac's greatest desire was and is to see all his family and friends come to trust in Christ and see them in Heaven. There, if he has any say in it, we will share in meals that consist mainly of Maryland crab cakes and spaghetti and meatballs.

Ed left everyone who knew him better for it. We will all miss him dearly!

He is survived by his loving wife Wanda of Sweet Home, Ore.; and his seven sons: William of San Bernardino, Calif.; Dennis and Holly of Mason, Ohio; Rick and Christine of Alta Loma, Calif.; Jerry and Melanie and Dean and Martha of Albany, Ore.; Mark and Marcie of Sweet Home, Tim and Anna McCartin of Sylmar, Calif; 25 grandchildren; 30 great-grandchildren; and many dear friends that he considered family, who didn't only call him Mac but "Dad" and

A celebration of life will be held in the outdoor amphitheater at Community Chapel in Sweet Home, Ore., on Thursday, the 13th of August, at 4 p.m.

In lieu of flowers, memorial contributions can be made to Community Chapel's Mission Fund.