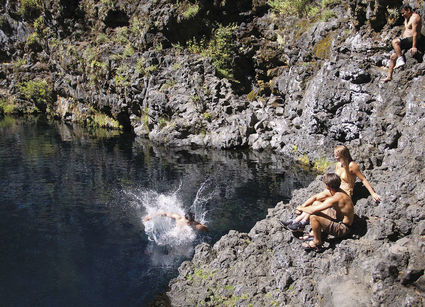 A VISITOR leaps into the frigid water at Blue Pool, on the Tamolitch Falls trail. The tens of thousands of annual visitors have overwhelmed the U.S. Forest Service, which maintains the area.

Tamolitch Falls spills into a jewel of a pool in the midst of the Willamette National Forest.

The miniature lake there, popularly known as "Blue Pool" for its iridescent hue, draws tens of thousands of visitors each year. It's an hour from Sweet Home and just a bit further from Eugene, so it's an attraction that draws visitors from all across the region, and even from around the world.

But that popularity has led to some danger and some degradation, according to first responders and foresters. The hike has drawn the attention of Tik Tokers and YouTubers who post videos of themselves leapin...