Officials say street sweeper is worn out, will be retired 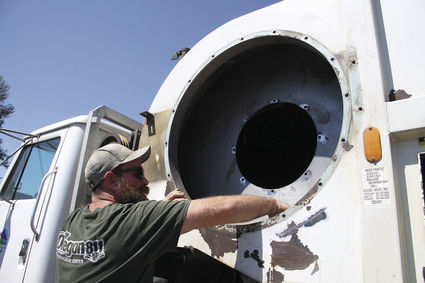 CITY MECHANIC Thomas Robey works on the city's street sweeper, Old Sweepy, which, officials say, is to be retired.

After mechanics noticed the sweeper was spitting up more dust than it was collecting, they decided to open the machine up and check it out.

City Mechanic Tommy Robey told the City Council on Aug. 11 that multiple parts of the machine were cracked, worn through, or run ragged.

"Some of it where the parts are so rusted and so thin, they just need to be replaced," Robey said. "It's falling apart pretty good."

He later said, over a pile of Sweepy's parts, that it might be quicker to describe what's still working...