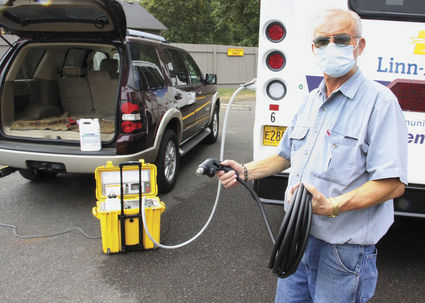 DANNY BIDWELL holds a spray nozzle that can be used to sanitize an entire room with the uint behind him.

Linn Shuttle is breaking ground in the county with a new system designed to sanitize the interior of buses – completely.

Ken Bronson, director of the bus service, said the $30,000 AeroClave RDS system was originally designed to decontaminate ambulances, but he decided to purchase it for the buses operated by Linn Shuttle. The RDS unit dispenses a mist of Vital Oxide, a chorine-based disinfectant, through a port that has been installed at the rear of each bus.

Four of the system's shuttle buses were outfitted for the spray by last Friday, Aug. 21, and Bronson said he hopes to have the en...