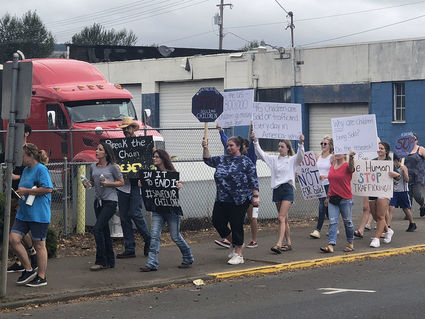 Local residents marched Saturday morning, Aug. 22, against child trafficking. Forty or so participants of all ages attended the March for the Children rally with the aim of bringing awareness to child sex trafficking. The morning march drew honks of support from passersby, and numerous children attended with their parents. Marchers walked from Thriftway to Les Schwab and back again, keeping to the sidewalks throughout. The rally was organized by Lisa Wilson and a Facebook group called Oregon Against Human Trafficking. Most of the signs directly addressed child trafficking, while a few referenced alleged conspiracies like “Pizza Gate,” which holds that Democratic politicians were running a child sex ring out of the basement of a pizza shop in Washington D.C. According to Wickipedia, that theory dated back to the 2016 election and was debunked "by a wide range of organizations," including the Washington, D.C. police, but has seen a recent resurgence thanks to the conspiracy group called QAnon.