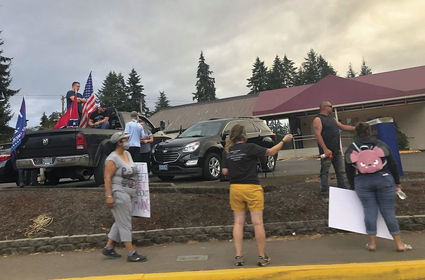 Participants in a Black Lives Matter rally, foreground, face off with protesters who arrived with an airhorn that, police say, they used to disrupt the rally Friday evening, Aug. 21, near the corner of Highways 228 and 20. Police Chief Jeff Lynn said that about 10 minutes before the BLM rally was to end, "a handful of individuals showed up and caused some verbal disturbances at the location." Police kept the groups separated, he said, adding that there were about five to 10 participants on both sides. "It's unfortunate that the incident took place. If the rallies continue, we'll have law enforcement in the area striving to make sure that they are peaceful."