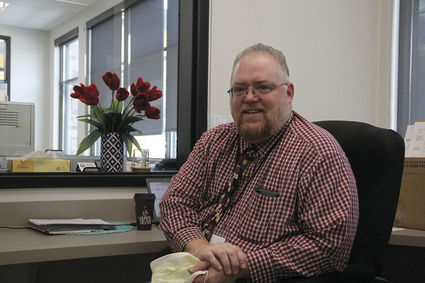 TERRY MARTIN, at his new desk at Sweet Home Junior High, says he's glad to be back in Oregon after many years as an educator in Alaska.

A longtime Alaska educator has been named principal at Sweet Home Junior High.

Terry Martin's hiring was confirmed by the School Board at its August meeting earlier this month.

Growing up in Hermiston, Martin wanted some adventure. After getting an undergrad degree in teaching at Western Oregon University, followed by a master's degree in school leadership at Eastern Washington, he worked for four years in Stanfield, Oregon as an English teacher. But adventure called, and Martin decided to head north, to Alaska.

"The freedom you have, the opportunity, hunting and fishing, it's just good t...