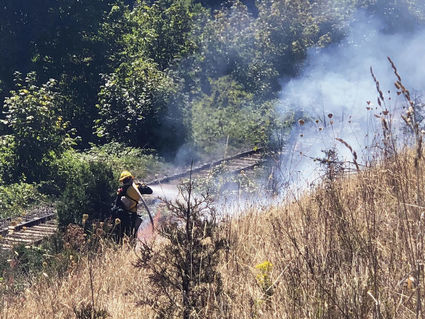 A firefighter sprays water on a brush fire on the slope between Highway 20 and the Albany Eastern Railroad line through the Narrows Sunday morning. Aug. 23. Thanks to an alert Oregon State trooper, a grass fire that ignited next to Highway 20 in The Narrows Sunday morning stayed contained until firefighters could get on it Sunday morning, Aug. 23. on the morning of Sunday, Aug. 23.The trooper spotted smoke and quickly called for firefighters to suppress the flames. The fire was under control within 20 minutes and stayed to less than an acre in size, said Craig Pettinger, Unit Forester at the Oregon Department of Forestry. Four ODF vehicles and several units from the Sweet Home Fire Department responded to the blaze, which still has an undetermined cause. "The fire started about the same time a train went through," Pettinger said. "Other than that it's still under investigation."

Gov. Kate Brown declared a state of emergency on Wednesday, Aug. 19, due to the imminent threat of wildfire across Oregon.

Much of the state is now in extreme fire danger, and red flag warnings have been issued for hot, dry, windy conditions and dry thunderstorms, officials say.

"Oregon has experienced wildfires this season that have resulted in evacuations, threatened critical infrastructure, and destroyed homes and other structures," according to a statement issued by the governor's office.

"The wildfire season has escalated in Oregon this summer, and fire crews are working in extreme...