Family works to recover after narrow escape from house fire 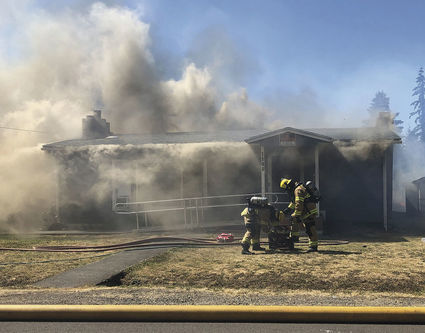 FIREFIGHTERS get set to battle a blaze in a home on east Long Street Tuesday, Aug. 25.

When Brandon Freeman heard someone scream "fire!" he leaped into action Tuesday, Aug. 25.

Freeman ran outside to grab a hose and rushed to where smoke was pouring from his home at 38th Avenue and Long Street. The back porch was already strongly ablaze at that point, and had started taking over the back wall of the house.

"By the time I got out there and started spraying it, there was just too much smoke and I couldn't stand there, it was too big," Freeman said. He was forced away, and ran back to the front of the house. By then, the kitchen was on fire and his father, in a...