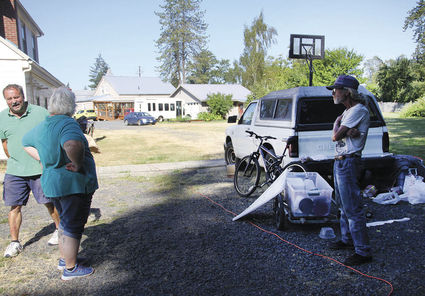 NAZARENE church Pastor Bethanie Young talks with Louis Carreiro and others in the parking lot.

Pastor Bethanie Young didn't expect to become an impromptu camp host for the homeless, but when COVID-19 shut down warming shelters in March, it was hard to turn the needy away.

Young, after all, is the leader of the Sweet Home Church of Nazarene, which is a mission-minded church bent on helping others.

"Our congregation members have been compassionate about the homeless in the community," she said, pointing to the church's longtime support of Sweet Home Emergency Ministries.

So when a couple of homeless folks had to be turned away from the warming shelter because the volunteers were sick, Young told them "we can't offer you a lot, but if you want to camp here tonight, where it's drier and out of the wind, we're OK with you sleeping on our stoop."

The original plan was for the campers to move on the next day, but the weather was still quite cold.

"The governor told us we couldn't have anyone in our building, so what could we do?" Young said.

Those two grateful campers soon were joined by a third, then a fourth, all through the cold and the rain of spring. The church building was closed and out of service due to COVID restrictions, after all, "so they kind of stayed and settled in," Young said.

Now, in September, there are still numerous campers living on church property with the permission of the church. In the heat, though, "they moved from the shelter to the shade," Young said with a chuckle.

Young spent 15 years helping the needy before coming to the Sweet Home church. She worked with Celebrate Recovery for over 10 years, where she helped addicts of all kinds overcome their addictions.

"We were dealing mostly with mental health and abuse. And yeah, drugs and alcohol might be part of it, but what's really happening is these people have lived really horrific childhoods," she said.

After working on addiction recovery for years, she was ordained as a minister and moved to Sweet Home, where she now volunteers extensively with Sweet Home Emergency Ministries – and fell into providing shelter to the homeless.

"It's just good that they're at least someplace where we know where they are," she said of the campers at the church. "If there is a COVID outbreak or an issue that we need to address, we can pretty easily find them."

The impromptu camping arrangement comes with a few rules. Namely, the residents behind the church need to keep their tents down during the day and clean up any trash. Jeff Young, the pastor's husband, said the city would prefer not to have tents out during the day, hence that restriction.

Bethanie Young said those who follow the rules can use the water and power from the church, and they're provided garbage services as well.

The stability of having a place to stay has been a boon for some of the residents, she said.

"One of them has been able to get, like, his ID and his glasses and some of his Social Security moving forward, So he actually has hope of getting into housing."

Rachel Lytle, a harm reduction specialist who works with the homeless for Linn County Health Department, said the church's involvement has been a major service for the homeless.

"They have been working with us to create a spot where all the clients can just pick up and drop off mail," she said, which helps them apply for government services, get ID cards, and even gain access to cell phones.

Young and her family live in a home right beside the church, so the homeless residents are her new neighbors.

"We try to be friendly, and they're friendly and respectful back," Bethanie said. "Just getting to know their stories."

She said the longer-term campers have been helping make sure new arrivals follow the rules that are in place, especially regarding cleaning up.

"If you just pick up after yourselves, no one will ever have anything to say against you."

There have been a couple of complaints when the new residents get too loud or boisterous, but Young has developed enough of a relationship with them to talk them down.

"People aren't forthcoming if you're not willing to sit down with them and be in their space, so to speak," she said.

Having those boundaries is actually a useful lesson for the unhoused, Lytle said. "They've been teaching them that they have to clean up and that there are consequences if you don't do this and that, which is very helpful," she said, adding that the church is teaching its new campers to be respectful, and that respect is met with rewards like stability.

"When you learn the consequences of things, it gives you an idea of what not to do next time."

Young said it can be a bit of a tightrope walk to make sure everyone's needs are met. "It's interesting trying to balance the community, keeping them stable, and not crossing a line for the church. And, you know, we want to protect our property and stuff as well."

Resource teams often come to the church to find clients, who would otherwise be difficult to track down as they move around the community trying to find places to sleep.

Visitors also come by to see the campers, either to hang out or to bring food.

"We've had as many as 10 sitting out there," Young said. "We don't go out there at night to see who's sleeping out there."

In the midst of the pandemic, Young believes it's safer for the homeless in Sweet Home to be easy to find in case of an outbreak.

"We've been talking to the street ministry about how to shelter in place, whether we can bring a bathroom in for them, and the congregation here is not against it." she said.

That will be a matter of funding and volunteer power to open up the church for safe showers and restroom use.

"We have the space. So if we can figure out a way to make all that happen, I'd rather see the building being used," Young said. The church has limited manpower, though, so it's a challenge to safely provide showers.

Lytle said there are many barriers in the way for the unhoused to become housed, functional members of society, showering among them.

"I hear a lot of people say, why don't you just get a job? But it's a much broader problem than that," she said. Employers expect employees to be on time, focused, well-rested, and clean – all challenges for someone living in the streets without transportation.

Employers also don't want their employees to bring their every possession into work with them, but leaving behind a pack of belongings makes someone unhoused prone to theft. 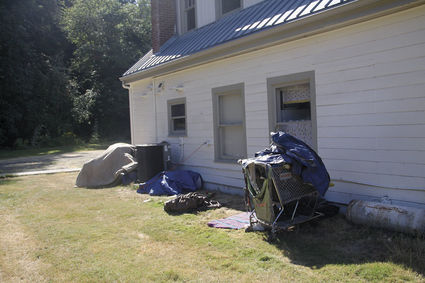 Campers leave their belongings next to the church, out of sight of neighbors.

That's why Pastor Young is considering a permanent installation of lockers for the local homeless population to use, even if she doesn't have the staff to provide showers. Having a locker provides security for a person who needs to attend an appointment and can't bring their every possession with them.

She said it's all about helping the unhoused climb up to the next rung on the ladder toward housing.

"How can we help better and quit feeling like we're enabling behavior," Young asked. "How can we break the cycle?"