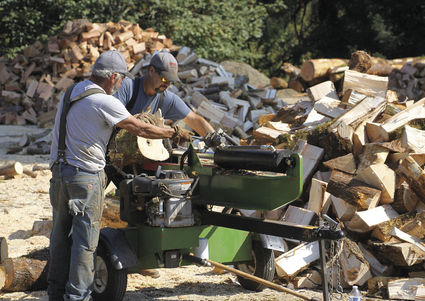 Jerry Wiles, left, and Terry Penix split wood for a fundraiser staged by local loggers last week at Cascade Timber Consulting headquarters to raise money for the families of two children struck by a runaway jet ski at Foster Lake on July 20. Zachary Maynard, 6, died after being struck while pushing his friend Kennedy Swanson, also 6, out of the way of the machine. Kennedy is recovering from severe injuries. CTC President Milt Moran said he came up with the idea after doing a similar fundraiser for one of his employees. He said the accident "hit pretty close to home" and CTC had logs that would otherwise go onto slash piles that could be cut up for firewood and sold. As of Monday, he said, 32 cords had been promised to buyers and he expected to sell as many as 45. McCollum Logging crew members and CTC employees, left, worked in their free time to do most of the cutting and splitting, he said. "I've been feeding them donuts in the morning, pizza for lunch," Moran said. For information on how to purchase the firewood, visit CTC's Facebook page.