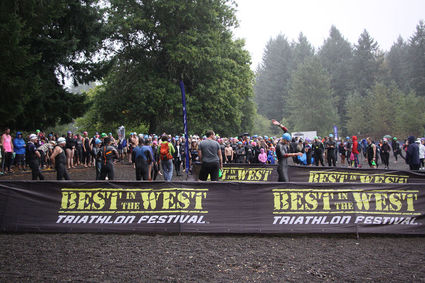 COMPETITORS in last year's Sprint Triathlon event limber up as they await the start of the competition at Lewis Creek Park. This year's triathlon festival will be smaller, but is planned for this weekend.

Blair Bronson had big hopes for this year's Best In the West triathlon series, which is celebrating its 10th year in Sweet Home this weekend.

"We were hoping for our biggest and best yet, with close to 1,500 athletes, which would make it the largest multisport event in the state," said Bronson, who founded the triathlon event as a project when he was a student at Oregon State University. He now directs the event with his wife Stacy, who just finished her Ph.D. and is an anatomy and physiology professor at OSU.

With the entrance of COVID-19, things have changed, and Bronson is thankful to...