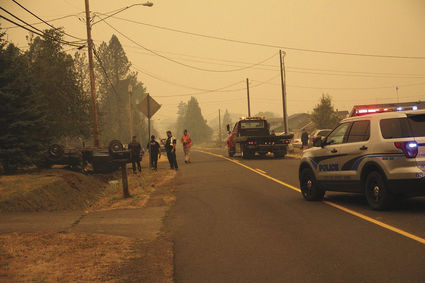 Rollover at 48th: Rescuers work at the scene of a rollover crash that occurred at the corner of 48th Avenue and Long Street Thursday, Sept. 10. According to Police Chief Jeff Lynn, police and medics responded at 4:25 p.m. to find Katrina Andrews, 41, of Sweet Home inside the vehicle. Lynn said witnesses told police that the car was westbound on Long, coming around the corner off 49th, when it veered into the ditch on the south side of the road, causing it to overturn. Lynn said there were no serious injuries, but Andrews was transported to Samaritan Lebanon Community Hospital. He said Monday that an investigation was still in progress.