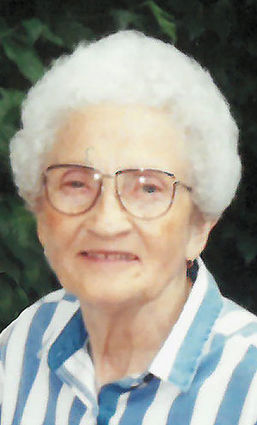 Frances was a loving wife, mother, grandmother, sister, and friend.

She was born June 1, 1923 to Bird and Sarah Hill, near Frederick, S.D., the seventh of 11 children. She was the last survivor of her siblings.

The Olsons made their home in Sweet Home since 1946 after moving from Aberdeen S.D. They started Olson’s TV & Radio and operated it from 1954 until their retirement in 1985.

Mrs. Olson was a woman of many talents, but her greatest joy in life was her family. She was a natural-born hostess and an outstanding cook, a talent that she was overly modest about.

She was a big believer in physical fitness and walked countless miles in and around Sweet Home well into her 80s. She was featured in an article in The New Era about her walking.

In her final years when she could no longer do distance walking, Mrs. Olson often recalled the earlier years and how it used to feel as though she were “gliding over the earth.” She truly missed that.

She and her late husband both thoroughly enjoyed country western music.

After their retirement, the Olsons especially enjoyed attending activities and sporting events of their grandchildren and great- grandchildren and “treasure hunting” at garage sales and swap meets and flea markets. She also enjoyed a good game of cards or dominoes and played regularly with friends and family into her 90s.

A private family gathering will be held at a later date.