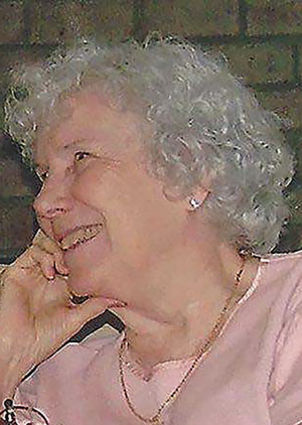 Her death came 35 days after her husband, William Edward McCartin, who died Aug. 7 after 78 years of marriage.

Mrs. McCartin was born Jan. 6, 1925 in Haggerstown, Md., to Harvey and Clara (Bean) Smith. She was the oldest girl in the Smith family of 13 children.

She met Edward McCartin in 1942 at a church function. Within five months of meeting they were married on May 9, 1942.

When her husband was inducted into the army in December 1942, Mrs. McCartin stayed behind in Maryland and helped in the war effort by becoming a “Daisy Riverter.”

Their first son was born while Mr. McCartin was serving  in World War II and Wanda faithfully cared for him until Ed returned 2½ years later. Their family grew to include seven boys.

In 1965 Ed and Wanda and their five youngest children moved west, first to New Mexico, and then to Hawthorne, Calif.

Mrs. McCartin went to work for Hughes Aircraft, where she worked until she retired. In 1992 the McCartins moved to Sweet Home. Here she began to enjoy her retirement years by traveling, tole painting and quilting.

An avid quilter, she crafted over 15 beautiful quilts, which she gave to family to cloak them in love.

Viewing will be from 10 to 11 a.m. Saturday, Sept. 19, at Sweet Home Funeral Chapel. A family graveside service will follow at 11:30 a.m. at Gilliland Cemetery.

In lieu of flowers, memorial contributions can be made to Sweet Home Community Chapel’s Mozambique Mission Fund.