Best in the West held quietly, in low-key format, but with big finishes 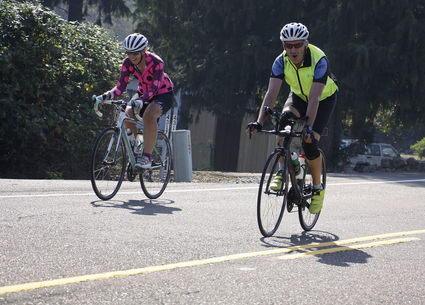 KEN BRONSON, right, finishes the 112-mile bike portion of the Ironman Triathlon he completed Sunday. Riding behind him is his sister, Janet Bronson of Tigard.

With plans for this year's Best in the West triathlon series already contingent on multiple COVID-related factors, the event actually got temporarily derailed by ... smoke.

Scheduled for Sept. 12 and 13 at Lewis Creek Park, the event was held over the past weekend, and in a virtual format.

One of the biggest finishes of the weekend was local triathlete Ken Bronson's completion of a full Ironman triathlon.

First, though, the trick was to get the event up and running.