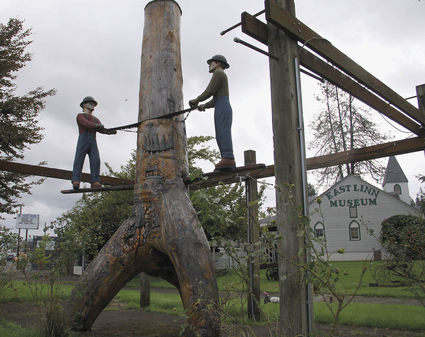 THE CARVING depicting old-time loggers in front of East Linn Museum actually sits on ODOT land, making maintenance and changes a bit complcated for Mike Melcher and Robin Miller, the men who got it built.

The chainsaw carving at the intersection of Highway 228 and 20, in front of the East Linn Museum, is deteriorating in the Oregon weather, but nobody is really taking care of the statue.

That's because the Oregon Department of Transpiration owns the slice of land the statue sits on, as it used to be a public right-of-way in the form of Holley Street. Now ODOT wants the city to take over care of the plot, but wants to keep ownership of it.

For the two men who arranged to have the statue placed there to welcome visitors to town, it's become a major headache.

"I've been watching this thing fo...