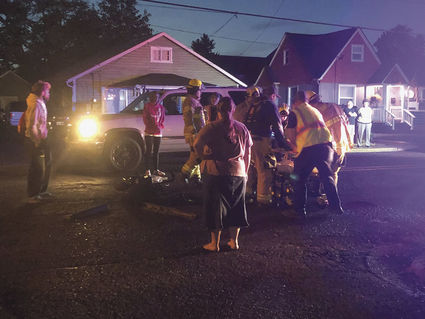 Crash on 18th: Medics assist a man who, police say, was hit by a car Wednesday evening, Sept. 23, on 18th Avenue at Kalmia Street, just south of Long Street. According to the police log, Joshua Martin Hughes, 18, was riding a scooter when he was struck by a vehicle driven by Debra Kay Livesay, 60. Hughes was transported to a hospital by medics. A report was taken and a green mini motorcycle was seized as "stolen property" and a black mini motorcycle seized as possibly stolen, according to the police log. An investigation is pending.

12:07 a.m. – Officer located Sammy Hughes, 19, on a Sweet Home warrant for failure to appear on original charges of theft and criminal mischief, and a Linn County warrant for meth possession.

9:56 a.m. – Caller reported neighbors are using a fire hydrant to water their lawn, 4600 block of Kalmia. Officer responded, haven't removed the hose, but not currently using it.