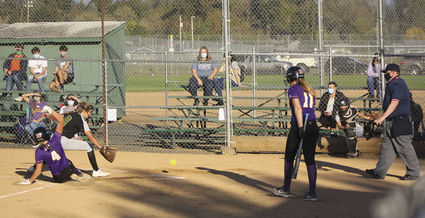 MADDIE HARRIS reaches for a throw from Chloe Fairchild in an attempt to tag an Eagles runner at the plate.

It had been 17 months since the last time Sweet Home's softball team took the field at home, and they made it count Thursday, Oct. 8, with an 11-6 win over Harrisburg.

After Harrisburg took a 2-0 lead off Sweet Home starter Savannah Hutchins, Maddie Harris led off in the bottom of the first with a double to left field and the Huskies were on their way, scoring three runs in the first inning and adding four more in the second as Sweet Home pitchers shut down the Eagles through the next two innings.

Harrisburg scored two in the fourth and another two in the sixth, but the Huskies kept the p...