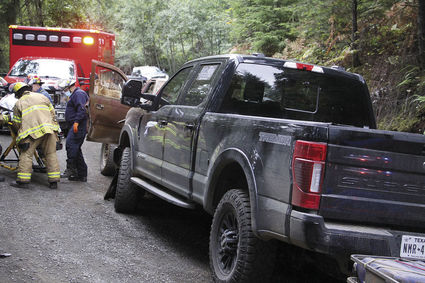 Medics prepare a patient for transport to the hospital after a head-on collision between two pickups Wednesday morning, Oct. 21, near the 2 milepost on Old Hufford Road. The Linn County Sheriff's Office said a caller reported the crash at 9:53 a.m. According to a Sheriff's report, a black 2020 Ford pickup was hit head-on by a red 1998 Toyota pickup that was traveling in the eastbound Ford's lane of travel. A female passenger in the Ford, who was not named, was transported with non-life threatening injuries. The driver of the Toyota, Sean Robinson, 36, of Lebanon, was cited for driving while suspended at the violation level, driving without insurance, failure to drive on the right-hand side, and driving an unsafe vehicle (bald tires). He was additionally, cited for an unrelated outstanding warrant for contempt of court out of Lebanon Justice Court, according to a Sheriff's report.