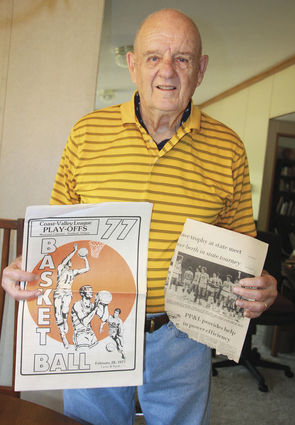 Since COVID-19 has hijacked much of local high school and youth sports this year, The New Era has decided to take this opportunity to produce a series of stories recalling big moments in Husky sports history. The series, sponsored by our Husky Supporter advertisers, begins today and will appear at intervals over the next few months, at least until OSAA sports begin. We start with Coach Felix Wilkerson's memories of Sweet Home's first-ever trip to the state boys basketball playoffs, back in the days when it was even more challenging than it is now to make state. Here, Wilkerson holds memorabilia from that experience.

Felix Wilkerson flips through the old album, full of newspaper clippings and photos.

"That's the season, right there," he says.

That would be the season of 1976-77, when Wilkerson, Sweet Home's basketball coach at the time, watched his team achieve what no other Huskies had up to that point: Make a run at the "Big Dance" in Portland.

"The individuals we had on that team were an exceptional group," he said.

Sweet Home had languished for years in the large-school division of the state, which was then simply split between large and small schools.

"We had not been successful," said Wilkers...