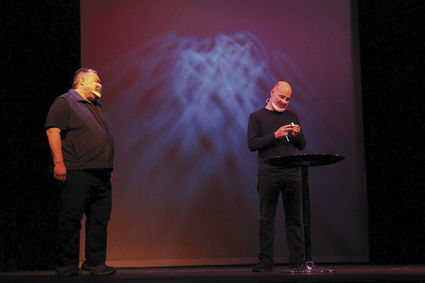 ROB OTREMBIAK, right, plays Paul Wilson in the play "Gettin' Out Alive," on of a series featuring veterans' stories in Veterans' Voices Project II. At left is Tom Martin, who plays a fellow Navy man explaining to Paul that the search had to be called off for fellow Navy man, "BG," who went missing in action.

As a storyteller and eight-year volunteer on the South Willamette Valley Honor Flight, Leigh Matthews Bock has found "the perfect marriage" through her new project at the Majestic Theatre in Corvallis.

The Veterans' Voices Project II, directed by Bock, is a series of short plays that give glimpses into the lives of veterans as they served their country.