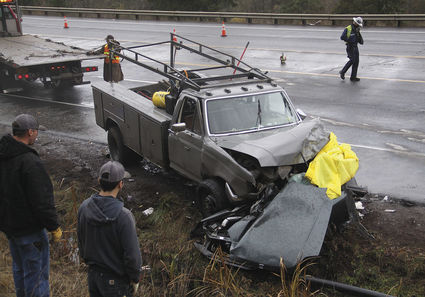 Onlookers watch as a tow truck driver prepares to load a pickup that collided with a Honda Civic Friday morning, Nov. 13, on Highway 20 in the Narrows. 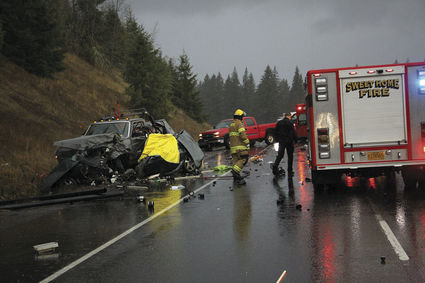 A Eugene man was killed Friday morning, Nov. 13, when his Honda Prelude collided with a Ford F-350 pickup in The Narrows area of Highway 20, east of Sweet Home. According the Oregon State Police, Kenith Dell Laster, 27, of Eugene was westbound on the highway near Milepost 25, east of Dew Road, when he lost control of the car, which spun out and stopped in the eastbound lanes, where it was struck by the pickup truck, driven by Mitch Levi Carter, 30, of Sweet Home. Sweet Home police and Sweet Home Fire and Ambulance rescue personnel responded to the scene at about 7:53 a.m. According to a police report, Laster was pronounced dead at the scene. Carter was transported by a private vehicle to Good Samaritan Regional Medical Cener with "non-life-threatening injuries, the report said.