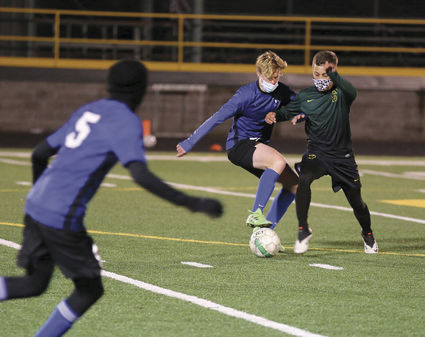 The Huskies lost 6-0 Tuesday, Nov. 10, to Western Christian, then lost 2-1 to Blanchet on a late-game goal.

The Western game "started really well, Coach Eric Stutzer said, but 12 minutes in Sweet Home gave up a goal "and heads went down."

The Huskies got out of synch on offense, failing to spread the field, and the visitors took advantage, scoring three goals by the half.

"We weren't able to get anything going on the offensive side of the field, which set them up on the 50 yard line," Stutzer said. "It put us in a shooting gallery, is what it did."

In the second half, Caleb Christman moved to the front line from midfield, which gave Sweet Home some extra firepower, Stutzer said.

"We ended up getting quite a few shots in the second half, seven or eight."

He said defensive lapses accounted for two of the three second-half goals for Western, though he said the officials acknowledged that they missed a call on an illegal penalty kick by the visitors.

"It is what it is," Stutzer said. "We don't let things like that determine how we play."

The Huskies played better all around against Blanchet on Thursday, Dec. 12, he said.

Blanchet got a goal late in the first half when two defenders were in what Stutzer said he believed were offside positions and the ball "blew past us."

Sweet Home bounced back, though, two minutes into the second half as Colton Savri put the ball in the net for the Huskies.

Late in the second half, Sweet Home misplayed a Blanchet defender who got the ball to teammates who scored, for a 2-1 lead.

Despite several opportunities at the end of the game to tie the score, the Huskies fell short. 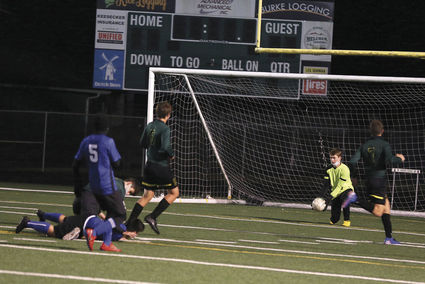 MAX KLUMPH, center, watches as goalie Evan Towry stops a Blanchet shot, as Chris Christman moves in on the right.

"We are inexperienced," Stutzer said. "We have four seniors and one junior. The rest are freshmen and sophomores.

"When you start having freshmen and sophomores playing at the varsity level this early, that makes a big difference."

However, he said, the Huskies' play was "really encouraging, after such a short amount of practice."

"I felt like our midfield play and our defensive play was much better" against Blanchet.

"We were moving the ball to the outside of the field very well."

He said the level of talent and dedication in his young players reminds him of the team that was in a playoff position several years ago. "I think same potential exists here," Stutzer said.

"It's just a matter of getting kids to believe in themselves and play with confidence."