Downtown owner restores old building that will be store 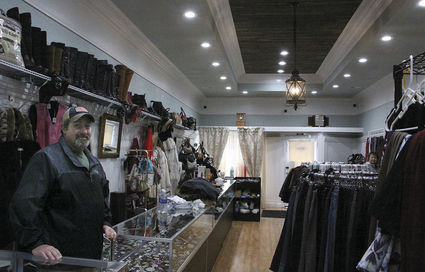 SCOTT SNEDEKER stands inside the downtown building he has rehabilitated, which his mother-in-law is turning into a clothing store.

Scott Snedeker is, by his own admission, a "do-it-yourselfer."

So when he moved to Sweet Home in 2015 with his wife Helen, from Arizona, he saw opportunities to invest and apply his skills in the downtown area.

He ended up buying a building on the corner of 12th Avenue and Main Street and this week his mother-in-law is opening a clothing store in a unit that he has almost completely renovated.

"I want to make my building marketable," Snedeker said.

Bill Matthews, who operates a health insurance consulting business in the next building over from Snedeker's, said the change has been significant.

"What a transformation," said Matthews, a former chamber president and member of the Sweet Home Active Revitalization Effort. "It has been great to see him work on it, get more and more involved in what he was doing. He's made a big impact."

Snedeker served 16 years in the military – 10 in the Army and six in the Air Force Reserves – before moving to Oregon and is currently attending Oregon State University, where he's majoring in horticulture. He may eventually open a nursery, he said.

Meanwhile, after arriving in Sweet Home in 2015, he thought about purchasing the Cascade Laundry, which was for sale on Long Street. He also hoped to get his daughter established running a coffee kiosk next to the laundromat.

Problem was, banks didn't want to finance that purchase because "it's a cash business," Snedeker said, so the kiosk didn't work out either.

He said he liked "the cool mural" of a police car and former officer Bill Davis painted on the side of the building, which houses three commercial units at 1200 Main St., and he'd been keeping an eye on it.

"I was thinking, 'What kind of money would have to be put into it to bring it back to where it looks nice?'" he said.

The building, owned by local chiropractor Dr. Ronald Hartman, had been on the market for quite a while.

"We threw a dart and it worked out," Snedeker said. The purchase went through in December of 2017.

Along with a longtime chiropractic business office that still is located in the 1206 Main unit, the building contained a thrift store in the 1200 end.

Snedeker started with outside upgrades – working during the following year to put up a new awning, architectural wood trim, new stucco in places and new paint. In the spring of 2019 he finished the exterior with some crown molding and ridge flashing.

By that point, the thrift store owner had moved out and Snedeker went to work on the interior.

"I knew I had to do something with the inside," he said. "We knew my mother-in-law and father-in-law were moving up here. She'd always wanted to have her own clothing store."

His mother-in-law, Cha Crown, has extensive experience working for upscale clothing retailers such as Dillards and Macy's.

"She's been in that business a long time," Snedeker said. "She knows what to look for, the deals she can get. This is kind of her retirement hobby."

Making the building marketable, he said, would enable him to rent it quickly.

To get that unit up to snuff, though, "I had to do pretty much everything. It was pretty worn down."

He put in a new shiplap wood ceiling, replaced a whole wall of lathe and plaster with drywall, installed wainscoting along the walls, built a dressing room for the clothing store and expanded the storage area.

Snedecker said he's benefited from the city's Commercial Exterior Improvement Program, which at the time would reimburse up to 50 percent of the cost of a facade improvement project, up to $5,000, though for improvements that are deemed to have an exceptional public benefit, a business may exceed that total.

"I actually contacted them because I saw it was available," Snedeker said. "I mean, how can you go wrong getting half your money back?"

City Community and Economic Development Director Blair Lar-sen said that is the goal of the CEIP program: "To get stuff cleaned up."

The program is mainly designed to beautify commercial areas, he said.

"The council understands that commercial improvements can be pretty expensive," Larsen said. "This program is great because the applicant has some skin in the game. They have to pay at least 50 percent of the project." 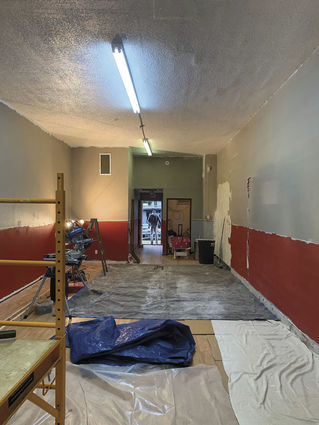 The building at the corner of 12th and Main, before remodeling.

Other locations where the city has recently awarded grants include the Sweet Home Pregnancy Care Center at 1344 Main St., O & M Point S Tire and Auto at 4420 Highway 20, and "everybody knows about the Rio Theatre," he said.

"The grant certainly helped get those porjects done. They stand out. They look good."

He noted that the grant is available to owners of buildings that are vacant.

"Just because a building is vacant, it doesn't have to look awful," Larsen said. "Those are ones we want to help. They can realize we can help make them look great."

"Scott's a good citizen, a good guy. When he got some project done, he'd say, 'Bill, Bill, come over, what do you think?'

"I've seen it transform from something that was really crappy inside."