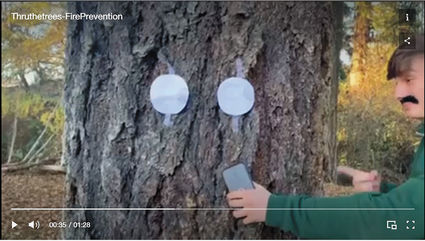 AIDEN SHAMEK, er, Benson the reporter, interviews "Mr. Pine" about forest fire safety in a video he and Carsen Palmer made, which won third place in a four-state competition.

Aiden Shamek said he first got interested in the Thru the Trees video contest earlier this fall when his natural resources teacher, Blake Manley, offered extra credit to students who would participate.

"I thought, 'Ah, that sounds pretty cool. I could make a little video and if I get a place, I could get some money too," Shamek said last week after he learned the creation he and his friend Carsen Perry put together had won third place in the four-state competition.

The Thru the Trees competition was put on by a consortium of timber-related organizations, including Oregon Forest Resources...