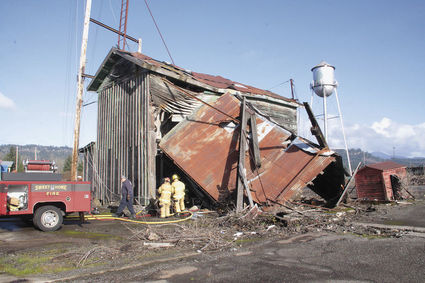 SWEET HOME Fire and Ambulance District personnel check out the interior of an abandoned building in the 2200 block of Tamarack Street Sunday, Dec. 6. According to a Sheriff's log, the fire was reported at 12:04 p.m. It was thought have been caused by a warming fire set by transients , which may have spread to surrounding downed timbers in the dilapidated structure. According to the Sheriff's log, it was not considered intentional. Report taken.

5:03 p.m. – Caller reported ex interfering with custody agreement; another caller reported ex's girlfriend showed up at her house and started yelling at her, 1700 block of Grape. Officer responded, contacted both parties, advised of their options and both were able to come to an agreement for the night.