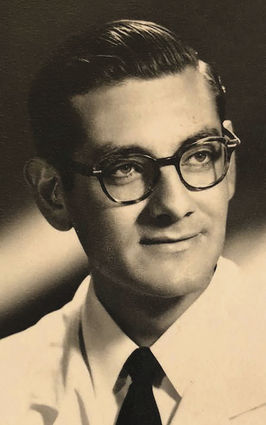 Born in Romang, Santa Fe, Argentina, on March 9, 1931, to father and physician Jose Antonio Hartmann and mother and school teacher Victoria Lavadenz de Hartmann, Ronald moved to Bolivia at the age of 3 with his family when his father was charged with running a field hospital during the Chaco War between Bolivia and Paraguay.

His earliest memories are of watching the advancing army while the hospital packed up to move to safety.

After the war, in 1935, his family moved to Santa Cruz, where they spent the next three years before moving to Cochabamba. There, he attended Colegio La Salle, and graduated in 1949.

Brave, adventurous, principled, strong, and deeply sentimental, Ronald spent much of his youth exploring the jungles of Bolivia. He would often venture into the forests with his pack, sometimes by foot, other times by raft. With his unflagging sense of right and wrong he could not tolerate seeing people get picked on undeservedly, and was known for sticking up for his fellow students at his school.

He developed his physical strength by following Charles Atlas’s exercise regime, and was proud when his bicep measurement was just shy of Joe Louis’. He perfected the Iron Cross on the rings in gymnastics.

His strength stayed with him and sustained him through the grueling long hours of his medical training, and later came into play when he strapped a washing machine to his back and carried it up a flight of stairs, to their apartment in White Plains, N.Y.

Despite his strength and athleticism he was also deeply feeling, sensitive, and artistic. He played the piano beautifully, and disappointed his teacher only when he decided not to become a concert pianist.

Throughout his life he was always fascinated by planes. He dreamed of becoming an aerospace engineer, but upon his graduation decided instead to follow in his father’s footsteps. He enrolled in San Simon Medical School, where he studied from 1950-57.

He received the Urbaitel Prize, awarded to the top graduate each year.

His first employment as a physician was in the small village of Villa Tunari in the Bolivian jungle. Upon arriving at the small jungle village where he was to reside, he found a disheveled and unfurnished house that was to be his home and office.

With help from the villagers they cleaned the house, and cut back the encroaching jungle. He used bamboo and some twine to make his bed, chair, and desk.

The following year, he got a job with the Gulf Oil Co. working in the jungle again. In addition to working as the company doctor he also traveled deep into the jungle to immunize many of the native people against western diseases.

It was upon returning to Cochabamba from his post that he met the love of his life, Maria Eugenia Dotzauer in 1958. They married in 1960.

With very little English under their belts, they honeymooned in Florida, en route to Bridgeport, Conn., for his internship. They moved into a small apartment, furnished with their suitcases for chairs, and the window sill for a table.

They shared a car with a fellow intern. In 1961, their son Ian was born.

Later that year, they moved to White Plains, N.Y. for his surgical residency, where he quickly distinguished himself with his keen ability to make accurate and often difficult diagnoses, a trait he continued to demonstrate throughout his career.

In 1964 they moved to Buffalo, N.Y., for his cardiovascular and thoracic residency, which rotated through Buffalo General, Roswell Park Memorial Institute, the Veterans Hospital, and the Children’s Hospital. They moved into a small A-frame home in the nearby town of Holland.

Following the completion of his residency, he stayed on at Buffalo General for two more years.

Determined to bring the latest surgical techniques and practices to his beloved home country, they returned to Bolivia in 1967, where he took the position of Head of Cardiology at the Instituto Nacional del Torax in La Paz.

In 1972, shortly after the birth of their daughter Michelle, they returned to Buffalo, where he practiced at the Roswell Park Memorial Institute.

A family man through and through, he left the high-pressure world of long hours known to be the plight of specialist surgeons, to become a general practitioner in Sweet Home.

He became board-certified in family practice, and served as the town doctor from 1973 until his retirement in 1997. He saw patients from all walks of life, and would never turn any away for not having the means to pay.

In his retirement he became an avid gardener, continuously incorporating more and more of their eight-acre property. He continued to play the piano throughout his life, often recalling those dearest to him by playing the music they had once loved.

An incredible story teller, he kept his children and grandchildren enthralled with stories of his adventures. Deeply philosophical, he enjoyed long conversations and spent many of his years in retirement writing stories, some recounting his many adventures and others, works of fiction.

He leaves his family with memories of his yearly cooking tradition, preparing Bolivian Picana each Christmas, continuously inventing and experimenting with everything from hydroponics to building a waterfall in his garden, and singing Christmas carols with his beautiful rich voice.

His grandchildren’s memories include flying countless homemade kites and gliders of his own design.

He will be loved and missed by many, for he touched countless lives, but none more than his family, who loved him dearly and who felt his boundless love and prideful joy that radiated from his very being like the sun.

He was preceded in death by his brother, Luis Felipe Hartmann; and sister Beatriz Bedregal Hartmann.

Donations may be made in his honor to Doctors without Borders or Mercy Corps.

A post pandemic celebration of life will be held.