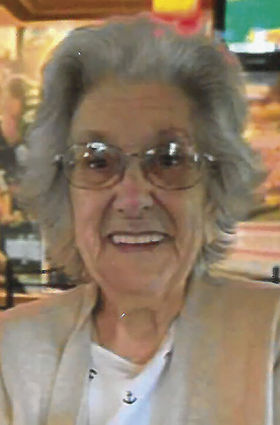 She was raised with her two brothers and had one sister, Marie, who preceded her siblings in death at a young age.

She moved to the United States when she was 3 years old and grew into a strong, hard-working woman of faith.

Over the years, she held many jobs, including serving as a governess to the family of U.S. Sen. Rufus C. Holman, as a shoe model for Diana Ross and as a retail clerk.

While working as a waitress at Portland’s Lincoln Tavern in 1943, she was dared by a co-worker to “kiss the next guy that walks through the door.” She kissed the handsome sailor who was the next one through the door and shortly after, on Aug. 7, 1943, she became the wife of Merchant Marine Frederick Louis Gibson.

She will be remembered for her sense of humor, the many telling “looks” she might throw across the room at people, and her absolute need to know everybody’s business.

Her children recall her motherly love, the “bath days” when their mother would gently wash their hair in the sink and make sure they were ready to face the week. Favorite memories include the times they got to fall asleep in her lap.

Mrs. Gibson enjoyed life. She especially liked to crochet and do needlepoint. She often made afghan blankets for family members.

She and Mr. Gibson liked to travel to Reno, Nev., occasionally to roll the dice on some gambling.

Her family and friends will remember how much she loved hamburgers and French toast, stating that if it was too early for a hamburger, her choice was definitely French toast.

She was preceded in death by her husband, Frederick; her parents; her sister Marie; and brothers Leon and Darwin.

A shelter service was held Dec. 11 at Willamette National Cemetery, 11800 Mt. Scott Blvd., Portland, where she was buried next to her husband.