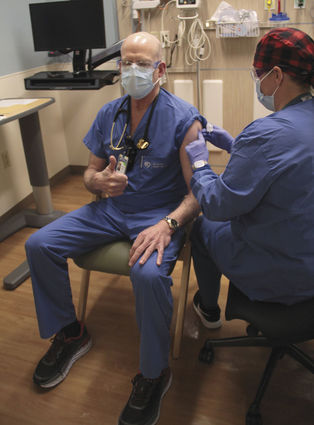 The Pfizer vaccine is the first to roll out, though there are six different vaccine candidates in various stages of the approval process, according to the national institute of health.

Adam Brady, an infectious disease doctor at Samaritan Hospital in Corvallis, said he wants to assuage fears related to the vaccine through education. Although the vaccines being rolled out are the fastest developed in history, he said that's because of new technology, significant research funding, and an expedited clinical trial process with overlapping trial periods, facilitated by an influx of research money from governments.

"A vaccine traditionally takes a very long period of time,"Brady said. "It can take up to 10 to 15 years or longer in non-pandemic times. We did have a head start because of pre-existing studies looking at SARS Coronavirus and MERS."

Finally, the high prevalence of COVID-19 virus made it much easier to determine the efficacy of the vaccine quickly.

"If you're making a vaccine for, say, something like Zika virus, you know, you may not have a lot of infections of Zika virus nowadays. So it can take years and years before you have enough infections in the control group to know that your vaccine worked," Brady said. "There's no shortage of COVID-19 in the United States, and so the data was able to be collected very quickly on the effectiveness of these vaccines."

The vaccines were given to tens of thousands of participants during the trial, he said, and it showed a 95% effectiveness rate, compared to the placebo group. Normal flu vaccine, by comparison, is only 40% to 60% effective each year, and is still recommended by doctors for general use.

At this time, the Pfizer vaccine has been given emergency use authorization by the U.S. Food and Drug Administration for administration to all adults over the age of 16 who do not have a history of vaccine allergies. The elderly, those who are pregnant, and those with underlying medical conditions are recommended to get the vaccine, and are ahead of healthy people in line, according to Centers for Disease Control and Prevention guidelines.

"Safety monitoring will continue through the full FDA approval process as well, and data collection on adverse effects will not stop because these vaccines have been authorized for emergency use," Brady said.

A representative of Samaritan said she does not have exact dates for when the vaccine will arrive in Sweet Home's clinic or at Wiley Creek. Samaritan has received 1,950 doses of the Pfizer vaccine in its first shipment, to be distributed throughout the company's network. The first vaccines were administered at Lebanon Community Hospital on Dec. 21.

Albany General Hospital in Albany and Good Samaritan Hospital in Corvallis each received 975 doses of the Pfizer vaccine the week ending Dec. 18. Lebanon Community Hospital administered 61 of the vaccine doses to hospital staff on Monday, Dec. 21.

Citizens on social media and other outlets have expressed concern about both the Pfizer and the Moderna vaccine because of their use of a new technology involving messenger RNA, Brady said, explaining the process in detail to assuage those fears.

The way it works is by using the body's existing machinery to translate a strand of mRNA into "something that looks like the coronavirus protein," Brady said.

The mRNA causes the ribosome – a kind of mRNA translator – to copy the "spike protein" that makes the virus so infectious, and puts it on the outside of the cell impacted by the vaccine. That causes the body to initiate its natural immune system response and develop antibodies to the coronavirus.

"There's no interference with your cell's DNA or your genetic material," Brady said, as each cell's DNA is protected in a nucleus separated from the ribosome. "And this messenger RNA, after it's used, it's very quickly degraded and does not stick around or integrate into any kind of nucleic acid or genomes."

"We don't have the machinery to convert RNA into DNA," Brady said. "This is all taking place outside of the nucleus where our DNA is held."

The specific mRNA technology used in the Pfizer vaccine was also previously tested for safety in humans, although this is the first vaccine to use the technology in broader populations.

This vaccine also has no possibility of giving a patient COVID, as it uses only one of the virus's 29 proteins – the one that allows the virus to inject itself into a victim's cells. Once the body understands how that protein works, it can learn how to prevent infection – but the spike protein itself does not give a patient coronavirus.

Patients who get the vaccine may experience some symptoms in the day or two after receiving it, including localized pain at the injection site, swelling, fatigue, or headache. But these are signs of the body's immune response, and the vaccine is less likely to impact one's daily activities right after it's administered than the very common shingles vaccine, he said.

Brady also said myths about nanochips or tracking devices in the vaccine are baseless.

"That's not something that has ever come up in medical literature or has ever had any hint of."

Another myth says the vaccine includes fetal tissue, which is not true.

"Some of the early studies on mRNA vaccines used some cell lines that, in the 1970s may have been derived from fetal tissues, but that was only used as proof of concept, and there are no traces of fetal tissue in any part of the process of making this vaccine," he said.

When will I be able

to get the vaccine?

The current round of vaccinations in Oregon is largely focused on frontline healthcare workers and other workers in hospitals.

After hospital workers, the vaccine will go to all healthcare workers, as well as residents and staff in nursing homes and memory care facilities. That's because those living in long-term care are at very high risk of severe negative impacts from COVID-19.

Access will be very limited in the beginning phases, according to a developed state plan. Oregon's vaccine allocation for this week was cut by 40%, according to Gov. Kate Brown.

"This was a federal decision, and I am seeking answers from the CDC about the reliability of the data we are receiving from week to week as Oregon builds our vaccine distribution plan," she wrote in a Dec. 17 tweet.

The first phase will be marked by very limited access to the vaccine, so the state plan has developed priorities within each phase. For phase 1a: 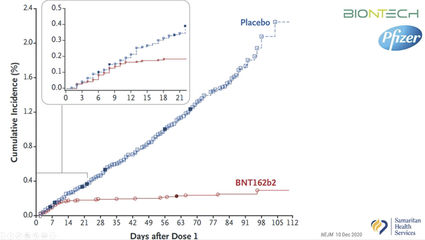 THIS CHART shows the difference n response by patients between the Pfizer COVID vaccine and a placebo in testing.

Phase 1a includes approximately 300,000 to 400,000 people, according to state estimates, which means at least 600,000 doses are needed for the two-dose Moderna and Pfizer vaccines.

Phase 2 priority groups will be determined at a later time, according to OHA, and the general population isn't expected to receive vaccination until sometime in the spring of 2021.

Brady said rural area clinics may be able to use the Moderna vaccine more easily than Pfizer because it doesn't require extreme cold storage.

"There may be special vaccine clinics in certain communities as well," Brady said.