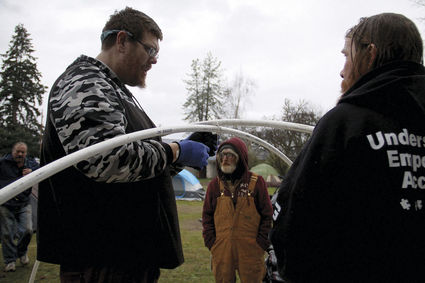 Addam Reel, left, zip ties two supports for a dome for the homeless, while Louis Carreiro and Michael Westby watch.

Winter, for older folks like Louis Carreiro, can be oppressive.

"Everything hurts with the cold. I can't bend over or anything," he said, bundled in layers of coats at the Sweet Home Church of the Nazarene, where he and other homeless individuals have been camping this winter. "I'm in nowhere near the shape I need to work, and it's getting worse."

But things are improving for Carreiro and the other campers on the church grounds. Platforms built to get them off the ground are finally seeing use, and the residents last week helped construct domes over their tents to create a better buffer from the wind and weather.

"The idea of the tarp is to keep the rain off the tent," said Jeff Young, who is spearheading the project. "We have materials for 20 of them."

That should be plenty for the 18 or 20 people who are already on the grounds, and a few more who may arrive in the future. There are four sets of couples on the grounds, so some of the tents are shared.

To construct the impromptu shelters, the two 4-by-8 foot platforms, constructed last month by local volunteers coordinated by the local Rotary Club, are placed next to each other to create a large enough spot for a tent. Then, PVC pipe is run over them to create a dome structure. Once a tent is set up inside, a tarp is pulled over the entire structure and secured to the sides of the platform with short lengths of PVC pipe that act as braces.

The design is intended to create a warm barrier of air around the tent, with the platform in place to keep the shelters off the wet ground.

Several campers at the church were helping with the set-up, even after their own shelters were completed.

"We're not afraid of work," said Addam Reel, a camper who recently came to the church from Waterloo. He said the temperature inside the enclosure is actually significantly warmer than outside it, and that it stays much more dry, other than some condensation. He noted that he actually overheated his first night in the tent, despite the cold.

"It's really nice, I don't have many complaints," Reel said. "You've got a great construction there, Jeff!"

Reel did add a few changes to the newer shelters, based on his experience in one of the first ones. They include a higher doorway entry and screws to secure the tent to the platform itself.

Nazarene Pastor Bethanie Young said a lot of the residents in the camp are helping with the transition.

"That just shows their gratitude and, in my opinion, it shows their respect to the situation and what we're trying to do for them," she said. "They don't have anything else to give, but they're willing to step up and help. And they were helping each other the other day: there were three or four of them out there building not just their own tent, but somebody else's."

As rain pattered down from oppressive clouds on Dec. 16, Reel, Carreiro and fellow camper Michael Westby continued to construct the shelters: moving the platforms into place, sawing PVC pipes down to size, and working with Jeff Young to screw each part into place. Each completed shelter takes about an hour to put together.

Westby and his partner, Crystal Deroche, came to the camp just two days before then, but they're already involved with constructing the improved shelters. The pair were staying with a friend in Salem until October, when they were kicked out. They came to Sweet Home because Westby's step-mom lives in town, and ended up at the Church of Nazarene when, they said, the landlord wouldn't let them move in.

"We want to live with her or real close to her," Deroche said, adding that she wants to become the step-mom's official caregiver. A native of Lebanon, she came to Sweet Home partially because she loves the small town feel – it's also easier for her to find Westby in a small town if he gets lost and has a seizure.

"I didn't feel safe at the parks in Salem," she said. The next step for her is getting an ID, but these improved shelters will be another good step up. It's wet and cold with the tent directly on the ground, she said.

Young said he's glad to see the platforms finally put to good use. "The Rotary came out and did all that work, and t Below, Jeff Young watches as Louis Carreiro, left, helps Reel pull the tarp over the structure. hen we couldn't put them up for a couple weeks," he said. The church had to pause the construction until some problems with insurance cleared up, but they're mostly resolved now.

Pastor Young said the encampment is now going to be designated as a "weather shelter," which is part of the reason each construction will be standardized. The residents will all be accounted for and specific rules will be in place to keep their areas tidy. The new tents will be uniform in size, construction and layout, and won't move around on the property. To deal with mud, they hope to bring in a load of gravel sometime soon.

The campers will no longer be allowed to use gas stoves in their tents, so the Youngs have set up a shared cooking area under a shelter for shared use. 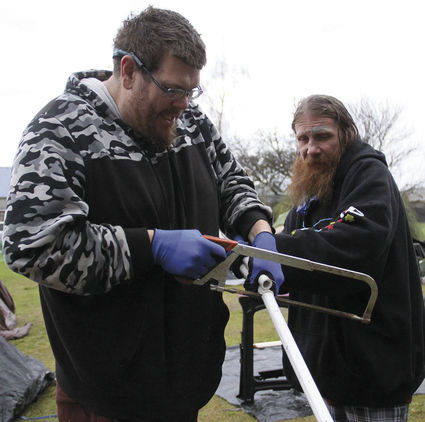 ADDAM REEL cuts PVC pipe down to size while Michael Westby stabilizes it. The PVC pipes form the structure for the tarp domes.

"We're gonna say no drinking and smoking pot, using drugs, and monitor that to the best of our ability," Pastor Young said. "We're kind of creating more of a safe camp environment so there'll be a check-in and monitoring the site and who's coming and going."

Her husband pointed out that the particular shelters aren't intended to be permanent.

"It's meant to get us through the end of March, which is when the city wants this camp to move, anyway. So we have till the end of March," he said. That's part of the reason they've chosen this particular design: It's impermanent, and it's inexpensive.

Those interested in helping with the weather shelter can give financial donations to the non-profit One Shelter or to the Church of Nazarene. For material donations, Young requests calling to see what is needed, or suggests that donors bring those materials to Sweet Home Emergency Ministries, which is better set up to receive such donations.