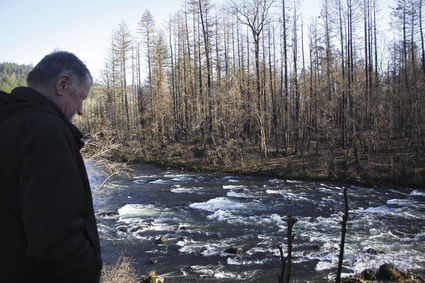 FRED GIROD gazes at the North Santiam River, flowing past burned-out forestland on the bank across from what used to be his home east of Lyons.

It was 1 a.m. on the morning of Sept. 8 when state Sen. Fred Girod awoke in his bedroom overlooking the North Santiam River.

He still doesn't know why.

"It was just one of those flukes," said Girod, who has represented the Sweet Home area since 2008. "I just happened to wake up, in the nick of time."

That, it turned out, was a life-changing and life-saving moment.

When the Girods retired earlier that night, they'd been told the Beachie Creek and Lionshead fires were well off – "30 miles away," he said. "We were not under an evacuation order."

But when he looked out the window in the...