Residents step up for shuttered businesses 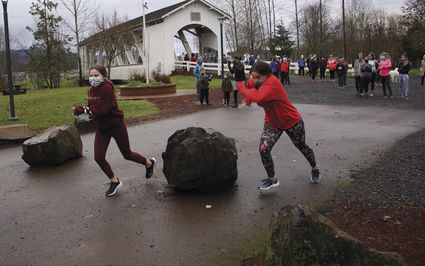 FUN RUN/WALK participants Annabelle Morris, left, and her mom Joanna Morris, get their staggered start on New Year's Day at Sankey Park. They were among nearly 100 people who showed up to get some exercise and donate in support of Steelhead Fitness, which has been shut down since mid-November.

Two local fundraisers have raised thousands to support struggling small businesses which were forced to close their doors because of the statewide coronavirus mandates.

A GoFundMe to "Save the Rio Theatre" has raised $11,248 of its $21,000 goal, with the aim of paying off the Rio's mortgage shortfall by mid-January. The theatre was six months behind on its mortgage at the start of the fundraiser on Dec. 15, and 136 people have donated so far. The Rio has been closed since before Thanksgiving.