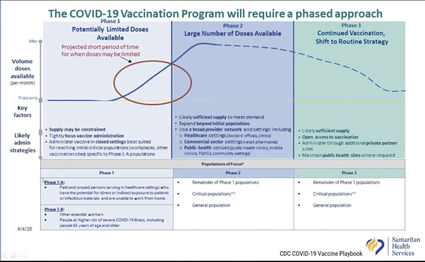 The COVID vaccine rollout is progressing slowly but surely across the state. So far, nine people have been fully vaccinated with both doses of the COVID vaccine, while 51,255 others have received just the first dose.

The Oregon Health Authority has set hospital and healthcare workers as the top priority, alongside vulnerable long-term care facility residents. In Linn County, 1,411 people have been vaccinated with the first dose so far: about 1 in every 100 people.

Oregon has distributed about 26 percent of its vaccine doses, and the Oregonian reported on Jan. 3 that the state trails 40 other states with its slow rollout. Nationally, the average distribution level is 33%.

In Oregon, distribution goes to hospitals and medical care companies, which then administer those vaccines. In Sweet Home, for example, Samaritan is bringing the vaccine to Sweet Home Fire and Ambulance District to inoculate EMTs.

Fire Chief Dave Barringer said the Moderna vaccine will be available to all first responders in the district on Wednesday, Jan. 6. Samaritan is providing the inoculations, and Barringer said 17 people have signed up to receive it this time around.

As for the COVID numbers, they remain high but dropping across the state. Linn County will remain in the "extreme risk" category until mid-January, following a Dec. 29 announcement by Gov. Kate Brown.

"As we head into the new year, I am asking all Oregonians, yet again, to commit to making smart choices and to take seriously their individual responsibilities during a public health emergency," Brown said in a press release on Dec. 31.

Oregon reached 1,500 covid-related deaths on Sunday, Jan. 3. Oregon only reached 1,000 deaths on Dec. 4, so more than a third of Oregon's deaths related to the disease have occurred in the past month. At that time, Linn County had suffered 24 deaths. It's had nine more since then, the most recent recorded on Jan. 4. She was a 92-year-old woman who died on Dec. 18 at Salem Hospital. Presence of underlying conditions is being confirmed.

Infections in Oregon climbed again this week after falling off from an early Dec. peak, which was widely attributed to the Thanksgiving holiday.

According to OHA data, around 2% of Linn County residents have tested positive for COVID-19, of whom about 1% have died. Oregon's most heavily impacted county, Malheur, has had 9% of its population infected, of whom 2% have died.

With 118,456 total cases in Oregon, only 2% of Oregonians have been infected with COVID-19. Oregon's fatality rate for COVID-19 is the fifth lowest in the country.