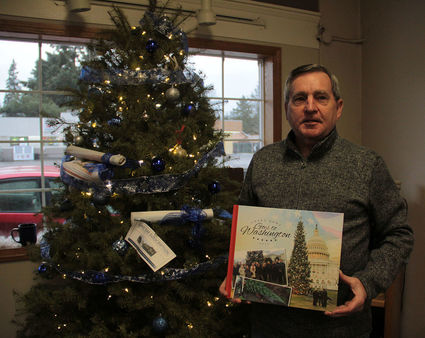 City Council member Dave Trask holds a copy of a new commemorative souvenir book that he and others have published to remember Sweet Home's experience in producing the U.S. Capitol Christmas Tree in 2018.

The production of the 2018 U.S. Capitol Christmas Tree made a big impact in Sweet Home's history and, to document it, some local citizens and a city councilman have produced a commemorative coffee table-style book as a remembrance.

The Sweet Home Ranger District was selected from the nation's national forests to produce the Capitol Christmas Tree, which was the centerpiece of a celebration that included a nighttime send-off parade, Christmas cards signed by local people who thronged downtown to see the tree, musical performances, and appearances and speeches by an array of dignitaries.

The creation of the hard-cover, glossy 72-page commemorative book was spearheaded by former The New Era reporter Sean Morgan, who pulled together an entire year's worth of newspaper reports and photos documenting the selection, preparation and transportation of the tree, and the trip local officials took to D.C. for the tree lighting ceremony. It will be available for sale to the public.

"It was a big layout job, really," he said of the book, which he started at Councilor Dave Trask's behest. Local graphic artist Chris Chapman designed the cover for the commemorative book, while all the photos and stories came from Morgan and The New Era archive.

Originally, the idea was to put together a traditional photo album, but the project really ballooned over time into a big story-telling project, including dispatches from Morgan's time as a reporter following Sweet Home's leaders through the U.S. capital.

"It was really exciting to get a chance to go back there and see Washington D.C. All those places I remember going on as a kid. And then to see a tree from our land here in Sweet Home lit up there on the Capitol mall, it's pretty cool," Morgan said.

The book starts from the beginning of the story, with the announcement that the Sweet Home Ranger District had been selected to send a tree to Washington. There are photos of the tree being selected and loaded on the truck, of children creating ornaments, quilters creating a skirt for the tree, and of the parade to celebrate the tree's departure for the long trip across the country.

"People all across town showed up to put this thing together. It was all led by Susan Coleman, and the committee," Morgan said.

Trask said he and Coleman helped pick out a lot of the photos for the album.

"It was fun because we had a great time," Trask said. "We wanted to have a record of it because we'll never get to do it again."

"It was a one-time deal. And it brought our community together like I have never seen," Trask said.

To him the parade was "absolutely amazing," and the trip to D.C. with him, Coleman and City Manager Ray Towry was fun, busy and productive.

Trask said the trip gave city staff and leaders the chance to meet with federal officials to learn about how to get funding, including some meetings with the FDA that helped set the city up for success in securing loans and grants for the wastewater treatment plant.

"We met with (U.S. Sen. Ron) Wyden and (U.S. Sen. Jeff) Merkley and (Congressman) Peter DeFazio. It was a good trip and we made some headway there for getting some help down the road."

"It was such an honor and a joy to be a part of. One person said it was like a Hallmark movie," Coleman said. "It was just a wonderful parade and the event and everything was just really fun. It was like God was smiling on Sweet Home." 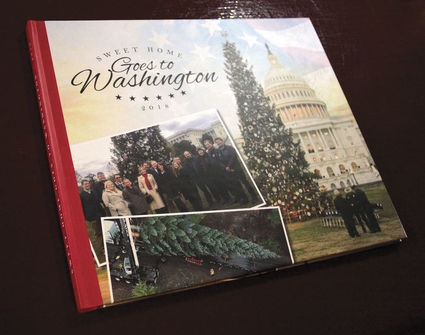 THE COMPLETED memory book contains newspaper accounts and photos of the process of selecting, cutting, transporting and lighting the U.S. Capitol Christmas Tree in 2018.

She also gave thanks to District Ranger Nikki Swanson of the U.S. Forest Service, the Rotary Club, the Chamber of Commerce, and all the students of Sweet Home who created decorations.

The book, titled "Sweet Home Goes to Washington," memorializes it all.

"It's for the people who want it," Morgan said.

Anyone interested in ordering two to nine books should drop off $95 in cash at The New Era along with name, address, email and phone number. The price varies on how many books are ordered.

If 20 or more persons order books, $10 will be returned when the book is delivered. The cost of the books is due to the fact that they are produced in small quantities, on quality stock., Morgan said.