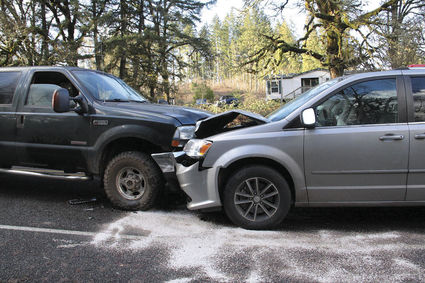 A Chrysler minivan and a Ford F350 pickup collided Friday afternoon near the corner of Liberty Road and Highway 20. According to the Sheriff's Office, Anthony Gardner, 25, of Lebanon, driver of the minivan, turned off Highway 20 and suffered a medical issue, which caused him to swerve and crash head-on into the pickup truck, driven by Keith Wolf, whose age was not available. Both vehicles also carried a single juvenile passenger, Sheriff Jim Yon said. He said no one was injured. Both vehicles had to be towed, due to extensive front-end damage, according to Sheriff's reports.