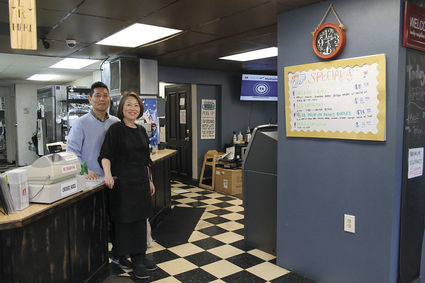 JOHN AND JANE SUH stand in Mr. Lucky's Deli, which they've acquired to slow the pace from high-stress jobs they've had earlier in life.

John and Jane Suh spent their entire lives in cities, but for the past year have been enjoying the relaxing benefits of rural, small-town life.

The pair acquired Mr. Lucky's Deli, 1207 Long, and moved to Sweet Home in February of 2020, just three weeks before the pandemic hit Oregon. Yet, despite COVID giving them a slow start to their new business venture, it hasn't stopped them from pursuing their dreams.

Together, their life has been a series of adventures.

John, 62, moved to the United States from South Korea with his mother when he was about 14 years old. They started in Maryland, then moved to Chicago where he earned his degree to work as an actuary, and then they settled in California.

Jane, 56, came to the states as a foreign student from South Korea when she was 24. She had earned her bachelor's degree in computer education in Korea, and attended U.C. San Diego to earn her master's degree.

After she graduated, she met John at a church function in Los Angeles and the two got married. They have two daughters.

When Jane gained extra weight during her marriage, she turned to acupuncture to see if it could help her.

"This was a whole new world to me," she said, but she found the technique helpful as well as interesting, and decided to study the practice herself.

People often ask Jane if acupuncture works. She tells them, "let's see," and a couple weeks later they're usually believers, she said.

John said his wife saved his own life using acupuncture and herbal treatments.

Sixteen years ago, he was managing a big development project that required him to wine and dine clients every night, he said.

"It's an Asian tradition," he explained. "They offer me a drink and I have to take it."

He could not refuse their offers, and he would go through two bottles of whiskey at one dinner meeting, he said.

Doing this every night, John's stress got progressively worse and he was tired, he said. On top of that, he was diagnosed with cirrhosis of the liver.

Eventually Jane had had enough.

She shut down her clinic, broke John's phone – which he was on all the time, cutting off all his business relationships, and moved him to San Diego, John said.

"I don't need the money. I need my husband," Jane said.

For the next four and a half years, Jane treated John with acupuncture and herbal remedies, he said. Later visits to the doctor revealed his cirrhosis was getting better.

He also credits his dog, Hōdoo, with saving him from deep depression after his good friend passed away. Without any other family in the United States, this friend was like a brother, he said.

John seems to have an easy time dropping laughter into his conversation, like when he points out that people pronounce his last name, Suh (rhymes with "duh"), incorrectly.

He laughs when he talks about the painful moxibustion treatment Jane performed on him those four years, a practice that involved burning a tiny piece of dried herb on his foot.

He laughs when he talks about not letting customers curse in his store, and he laughs about all the employees he's hired who have had bad work ethics.

Jane is the more studious one in the relationship. She went to cooking school for three years while studying acupuncture, and when people started asking about her talent in office design, she decided she should get a degree in design.

If Jane's the studious one, then John's probably the more business-minded one.

Together, the two have worked house-flipping projects. They also owned a Nathan's Famous franchise and sponsored hot dog eating contests, and are currently selling off their stock of home remodeling supplies in Salem.

In his earlier days, John worked with computers, a subject he has been "crazy" about, he said. He recalls printing his first picture – Mickey Mouse – from a computer, and using the punch card system to create programs.

He would manually produce a half-foot stack of hole-punched cards, then send them to the processor only to find out an hour later that perhaps there was an error on one of the cards.

"That was horrible at the time," he said, laughing.

John worked sales with top computer manufacturers such as IBM, and set up mainframe networks and POS systems.

Meanwhile, he was also trying to build his own style of computer. He wanted to make colorful computer cases that stood out from the boring beige color being developed at the time, and design a different look, he said.

Eventually he stopped pursuing that dream in exchange for working at an investment company.

John and Jane sit in their new deli in the smallest town they've ever lived in, and greet returning customers cheerfully. Jane thinks about new dishes she'd like to eventually roll out, and John thinks about a Christian center the two hope to build some day.

They want to run a nonprofit retreat for missionaries, offer a space for church functions, and provide training in employable skills. That is their No. 1 dream, John said.

The Suhs moved to Oregon after traveling back and forth from California to help a pastor fix his church in Portland. They opened their supply store in Salem and thought about planting their Christian center there.

"In California there was no land, it's so expensive," John said.

Eventually the two agreed John was once again busying himself too much with work, and his employees were causing a lot of stress.

Jane suggested he try something simple. That's when a broker told them about Mr. Lucky's Deli, which before the coronavirus pandemic hit, hosted a regular breakfast and lunch crowd. 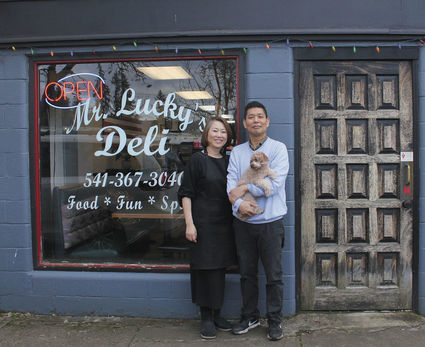 JOHN AND JANE SUH outside of Mr. Lucky's Deli.

"We bought this one because the broker told me we don't have to work hard," John said, laughing.

They were told it was so simple that all they had to do was sit there, make people happy and take the money, Jane said, laughing.

The first thing they noticed about Sweet Home is that the people are really nice, John said.

Jane also noted that, as a "serious hiker," she appreciates Oregonians' love of mountains, trees and nature.

"We like Sweet Home a lot because it's really cozy; it's small town," Jane said.